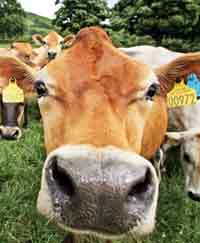 A £1m bill after a farmer was found liable when cows attacked a woman on a public footpath has fuelled fears that other producers could also face huge fines. Caroline Stocks investigates

Shirley McKaskie was walking along a footpath with her jack russell dog on farmland near Greystoke, Cumbria, when she was attacked by cattle.

The 40-head herd of Simmental-cross cows, which had calves at foot, tossed Ms McKaskie in the air, breaking her arm and ribs and leaving her brain-damaged and needing a wheelchair.

Earlier this month, a judge ruled that farmer David Cameron should pay £250,000 compensation plus legal costs for the injuries his cattle inflicted in 2003.

That sum could leap to £1m depending on the results of an appeal and an assessment of the Ms McKaskie’s needs.

The case has sparked fear among landowners with footpaths on their farms that they could face similar fines if their livestock injure walkers.

But legal experts have been quick to assure farmers this is not necessarily the case.

“The legal position for farmers who put cows with calves or any other livestock in fields is the same as it was before the case,” says Nina Winters, NFU chief legal adviser.

“The outcome of this case was based on the evidence that went before the judge. It was also a first instance decision, which means it’s not a legally-binding precedent.

“Other judges won’t necessarily have to find the same outcome, so the legal position was the same as it was before.”

“That’s not to say farmers don’t have a liability if someone’s injured if they walk through a field,” says Ms Winters.

“The key thing you need to do is make an assessment about the risks posed by your cattle and address them using proportionate measures.”

Ms Winters says addressing the risks will not prevent someone being liable, but it can help show a farmer attempted to inform people and reduce the possibility of attacks.

However, farmers considering erecting signs should seek advice, she adds.

“The law is quite complex with signs. They are okay as long as they are informative, but they can’t be cautionary.

“You can say ‘livestock in fields’, but you can’t say ‘danger’, ‘caution’ or ‘risk’ on land with public rights of way (though such signs can be used in fields with no public access). If signs are informative they need to be moved or covered when cattle are not in the fields.

“You could also ask dog owners to keep dogs on a lead, or ask that walkers be familiar of the countryside code, which mentions what walkers with dogs should do.

“If you do use signs that say ‘danger’ then you are potentially admitting liability if because you’re admitting there’s a risk. There are also offences relating to if you are deterring the public from using a footpath – it’s illegal to put people off walking along rights of way under the Countryside Rights of Way Act.”

Despite this latest ruling and several recent high-profile cow attacks, one resulting in the death of a vet and another involving former home secretary David Blunkett, Ms Winters says farmers should not panic.

“The thing to remember is these incidents are rare,” she says. “Cattle are usually very docile so these cases must be put into context.”

Indeed, in the 10 years to March 2006, the Health and Safety Executive investigated just 46 cattle attacks, seven of which resulted in deaths.

“The fact that these incidents are rare means that the numbers of cases that end up in court are small,” Ms Winters says.

“Farmers’ reactions should be proportionate to the risk and attacks haven’t happened that often. It’s your livestock and field conditions, so you should know what the risk is.”