Legal experts have warned farmers to establish the details of access rights on their land after a court battle threatened the future of a multimillion-pound soft fruit business.

The business owner, Bulgarian national Slavey Slavchev, and his wife Anna built up the soft fruit farm on land near Finchampstead, Berkshire.

They bought the 36ha parcel in 2011 when it was being used for sheep grazing.

The Slavchevs invested heavily in the venture, constructing storage and a reservoir as the business grew quickly.

But neighbours, whose property shared an access route to the farmland, took issue with the intensification of use.

They were unhappy that the access was being used by more traffic including heavy goods vehicles and an increasing number of farmworkers who lived on-site. 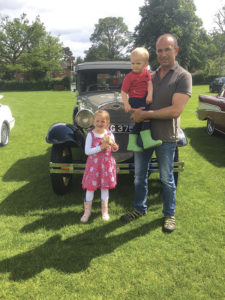 The court case was hugely stressful for the Slavchev family

They sought an injunction to stop the vital right of way being used by the business and the legal battle began.

Mr Slavchev described the dispute as the most stressful experience of his life.

He feared his right of way would be taken away and he would lose his business.

He also suffered serious stress-induced health issues as a result.

After contacting the NFU, Mr Slavchev appointed agricultural litigation lawyer Russell Reeves, who is a partner with law firm Thrings.

The root of the issue had developed almost 30 years earlier, long before the Slavchevs owned the land, Mr Reeves explains.

In 1988 the farmland that the Slavchevs later purchased and the farmhouse where the disgruntled neighbours lived had been one unit under an arable regime.

After the original owner of the unit died in 1988, the farmhouse was split off and was left to his widow while the farmland and farm buildings were bequeathed to relatives.

However, the two newly created parcels still shared a common access point via a driveway from a local road, says Mr Reeves.

Back then lawyers had foreseen the possibilities of long-term changes in ownership and development and in 1991 two legal descriptions of the access were created to define what were acceptable uses of the right of way.

Known as assents, the descriptions became the focus of Mr Slavchev’s court battle with his neighbours, which developed into a four-day hearing at Oxford County Court in May last year. 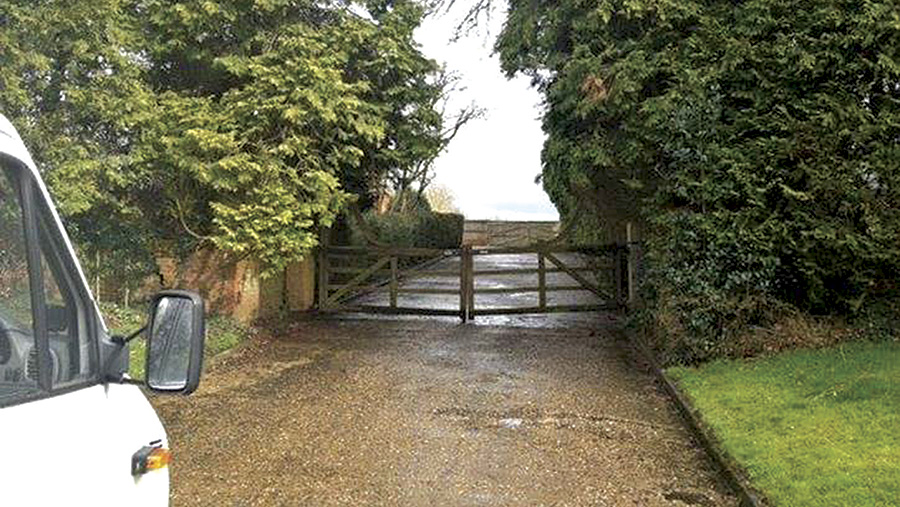 If rights to use the access road were lost, the soft fruit business would have been unviable

No fewer than 15 people were drawn into the case – solicitors, judges, a barrister and a Queen’s Counsel, witnesses and the two contesting parties.

How to find out if access routes cross your land

Farming experts were used to establish how much extra traffic had been generated by the soft fruit business compared with the original arable and sheep enterprises.

Ultimately, the future of the soft fruit business hinged on the meaning of a few words, says Mr Reeves.

The written assent allowed any owners of the farmland “…a vehicular and pedestrian right of way over the driveway…”.

That should have been enough to give the Slavchevs an unchallengeable access to the farmland.

But that key sentence did not conclude there. Written in 1991 it ended “… for all such purposes as are presently enjoyed”.

It was these eight words which had thrown the future of the farm business into doubt, Mr Reeves says.

The neighbours’ legal representative argued that the phrase “such purposes as are presently enjoyed” restricted the scope of use to a level compatible with the farm as it was in 1991.

Mr Slavchev’s legal team contended that the phrase meant the broader term of all agricultural purposes. 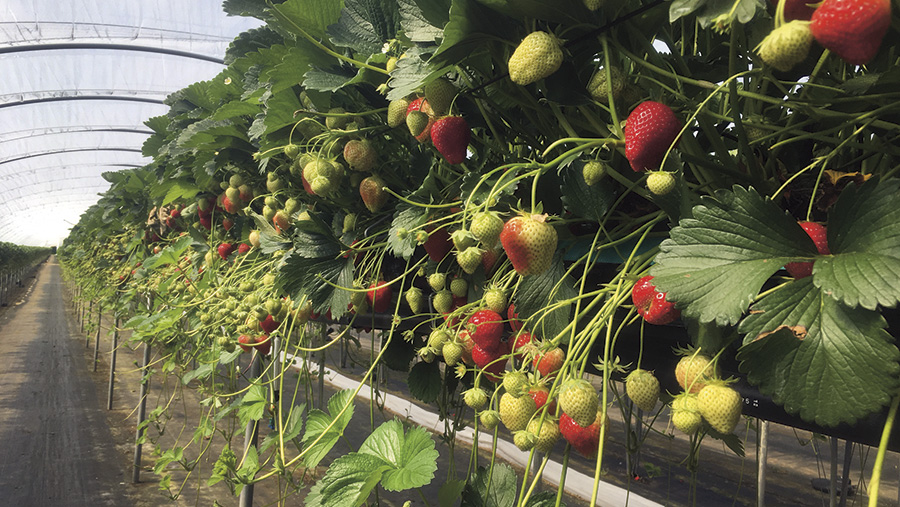 The Slaveys invested heavily in their soft fruit business

To make a decision on a case it has to be an objective appraisal of the wording, explains Mr Reeves.

“It cannot be a guess at what the subjective desires and intentions may, or may not, have been when the terms were drawn up for the original owner.”

Mr Reeves emphasised the complexity of the case: “Following the trial it took six months for the judge to arrive at his ruling. That is a long, long time for a case like this,” he says.

The judge ruled that the phrase “…for all such purposes as are presently enjoyed” meant only for the activity of passing to and from the farmland. It did not set out the scope of what the land could be used for.

The judge accepted the definition of the word “purposes” to be the broader term of agriculture, which was defined as the production of food by growing plants and rearing animals, says Mr Reeves.

The Slavchevs’ use of the land fitted into this description and was therefore not a change of use, merely an intensification of the same use, he says.

The judge also ruled that the number of vehicle movements had not increased beyond the original scope of the assents. 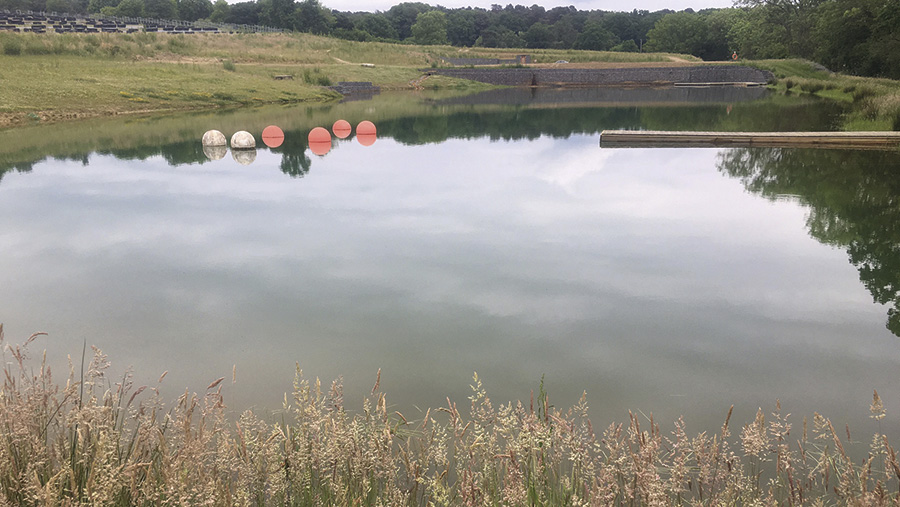 The Slaveys invested in an on-farm reservoir

The neighbours went to the Court of Appeal but their appeal was dismissed earlier this year.

Mr Reeves commented: “We successfully defended the case and were thrilled and delighted that a terrifically hard-working farming couple could continue building a business that has achieved tremendous growth and contributes enormously to the local economy and UK soft fruit market.”

How to stop it happening to you

Access is the primary area where contentions arise in land ownership, according to Becky Smyth, associate solicitor at Thrings.

Farms are frequently split up through land sell-offs or for changing use such as housing or diversification.

Or it may be that the business status changes – for example, from sole trader to partnership. The ownership details may also change through inheritance, family disputes or divorce.

Because it is not the traditional house-moving scenario, obtaining professional legal advice is often overlooked.

But it is worth its weight in gold to involve a good solicitor, she says.

The Slavchevs’ case is typical of a contention.

In so many cases there is a single access route with several parties using it for more than one purpose.

Who owns it and who has the right of way becomes a complicated legal balancing act, Ms Smyth adds.

By virtue that only one party can own the access, the other party has to have what is called an easement – one example of which is a right of way.

“How that right of way is created and defined is fundamental to ensuring that it doesn’t cause the problems seen in the Slavchevs’ case,” Ms Smyth says.

The route itself is primarily important in setting out the legal rights. It is vital to identify which land parcel the access is assigned to and describe what purposes it will be used for.

The creative nature of the lawyer comes into play here. An easement can be as wide as saying “for all purposes at all times”.

That is the golden right of way for the benefit of the whole land parcel.

But if you are the buyer and you see this golden right of way, be aware you have to leave the access completely open for use.

“If you want to limit the right of way it needs to be defined in terms of who uses it, the purpose and the allowable times of access,” she says.

Ms Smyth also highlights maintenance responsibilities as another layer in the legal documentation which must be set out.

Sometimes, sharing the maintenance is a condition placed on the continuing use of a right of way, for example, access is only allowable once the cost is met.

In other agreements it is established as a separate covenant detailed as “you will pay ‘X’ amount of maintenance” which is known as a positive covenant, Ms Smyth says.

These covenants are not always inherited by a future owner so this needs re-examining or all of the costs may fall to one party.

Another common pitfall that needs addressing is the prescriptive right of access, she says.

Written acknowledgment must set out:

This allows someone who has been using access unchallenged for a period of 20 years to have a legal right of way.

When buying land this area must be looked into.

The consequences of missing these types of access can be hugely costly.

For example, anything built on a prescriptive right of way may have to be demolished.

A lawyer will look at titles, carry out the searches and focus attention on the character, ownership, or benefit of the right of way.

If you think there is an issue on a piece of land it may be that you can sit down with the other party and discuss the scope of the access.

Ms Smyth advises that keeping a good relationship with the neighbours is always important.

Be sure of your position – stating it clearly may be enough to resolve matters if you have good communications with the other party, she says.

“Working with the neighbour or making a financial offer to secure what you want with the access may be worth it in the long-run financially,” Ms Smyth adds.

Cutting out ambiguity or improving the access could even improve the saleability of the land for the future.

“If the right of way remains ambiguous, do not concede any ground. You can ask the courts for a declaration to state and confirm its nature and extent,” Ms Smyth suggests.

“This may be sufficient to make it clear what rights other parties have and put a stop to any incorrect use or queries.

“If this fails, litigation may be necessary, but be aware that this carries costs – and potentially risks if the outcome is not as you want it,” she warns.