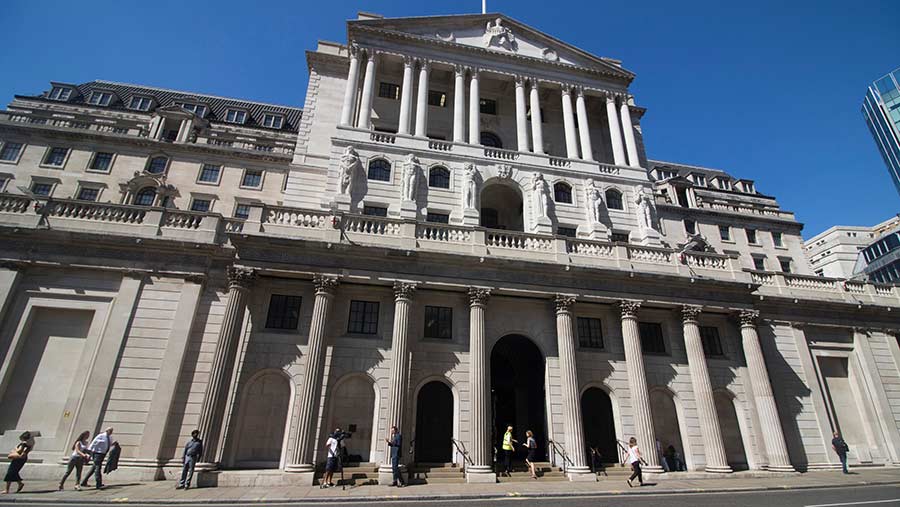 Bank base rates have risen by 0.25 percentage point to 0.75%, following the most recent meeting of the Bank of England’s Monetary Policy Committee.

The rise had been widely expected and follows two months (May and June) of inflation sitting at 2.3%, above the Bank’s 2% target.

A good portion of this will be on fixed rates but if the total was subject to the 0.25-point base rate increase it would cost the industry more than £471m extra in interest charges.

“The decision is an additional factor in an already volatile environment for farm businesses,” NFU economist Anand Dossa said.

“This summer’s drought shows the importance of investing in farm businesses to improve their resilience in the face of an increasingly volatile climate.”

Higher food and oil prices look like continuing to push up the Consumer Prices Index (CPI), with food price inflation estimated at 1.6% in July compared with 1.2% in June.

The CPI rose throughout 2016 and almost the whole of 2017, stabilising briefly in December of that year.

See also: Ask the right questions to get the right farm finance deal

It then fell through the first four months of 2018 but rose to 2.3% in May and stuck at this level in June.

Base rate highs, lows and moves