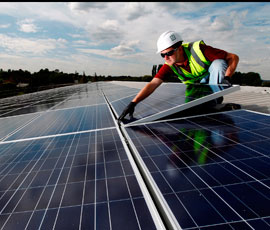 The government is to appeal a High Court decision yesterday (21 December) that ruled plans to slash Feed-in Tariff support for solar were legally flawed.

If the appeal is lost, the Department for Energy and Climate Change could be forced to delay its proposed cuts, which halved support available for some schemes installed after 12 December, potentially giving a window of opportunity for other new schemes to qualify for the higher FiT rate.

The High Court hearing was prompted when Friends of the Earth and two solar companies – Solarcentury and HomeSun – argued the cuts were unlawful because the proposed date for the tariff reduction was almost two weeks before an official consultation on the proposed changes ended.

DECC’s plans had resulted in “economic risk” for those engaged in the solar industry and had meant unfinished or planned projects were abandoned, they said.

Solarcentury chairman Jeremy Leggett welcomed the ruling and urged government to accept the verdict to avoid causing further uncertainty by appealing the decision.

“The Court has stopped government abusing its power but it doesn’t make up for the fact that DECC has created chaos for the renewable energy industry as a whole, and not just solar,” he said.

“All of this could have been avoided if DECC had done a proper consultation last summer, as they promised, and engaged constructively with the solar industry. I hope that DECC will now engage properly with the industry, so that together we can build a viable solar industry in the UK, as they have in Germany.”

But the Renewable Energy Association’s Gaynor Hartnell said the implications of the decision could jeopardise the longer-term future of the Feed-in Tariff scheme. If higher tariffs did get reinstated, the rush to complete projects that was seen before 12 December could be back on, at a time when the industry needed stability, she said.

“The focus has all been on PV, but other technologies – wind, anaerobic digestion and small-scale hydro also benefit from the policy, and developers of these schemes will be acutely anxious about the implications for their planned projects.

“The industry had been engaging with Ministers on getting PV on a stable trajectory to the end of this parliament we felt we were making progress, but everything now is uncertain.”

In response to the High Court ruling, climate change minister Greg Barker said: “We disagree with the Court’s decision. We will be seeking an appeal and hope to secure a hearing as soon as possible. Regardless of today’s outcome, the current high tariffs for solar PV are not sustainable and changes need to be made in order to protect the budget which is funded by consumers through their energy bills.”

The verdict came as a separate report by two influential committees slammed the government’s handling of the Feed-in Tariff cuts.