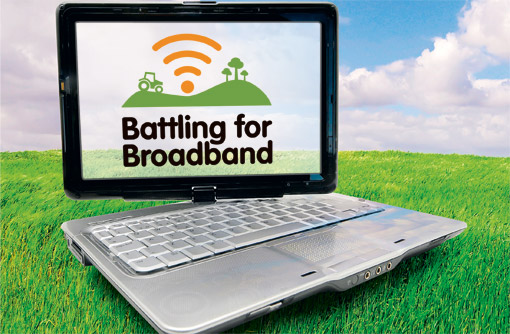 It has been a year since Farmers Weekly ran the Battling for Broadband campaign. Robyn Vinter finds out whether the situation has improved.

The Farmers Weekly Battling for Broadband campaign aimed to raise awareness of the problem of lack of adequate broadband in rural areas and offer solutions to farmers.

The campaign ran from April 2012 for seven weeks and each week we looked at a different method of rural broadband delivery, featuring technologies like satellite or wireless. These are still available on fwi.co.uk/broadband.

Since the campaign, the landscape for rural broadband delivery has changed. When Farmers Weekly last reported on the issue, the government had just announced a £530m finance package for getting 90% of the UK to superfast broadband and the remainder to 2Mbps. At this speed it would still take 30 hours to download a 90-min HD film.

However, during each stage of the bidding process in 2012 the number of applicants dwindled, leaving BT as the sole bidder for the full £530m pot.

The tender has been widely criticised by companies, industry bodies and community organisations for how difficult it was to compete with BT, which already owns a third of the broadband market.

Charles Trotman, head of rural business development at the Country Land and Business Association, says smaller community projects have pulled out because they don’t understand the process.

“The funding process has been horrendously complex,” Dr Trotman says.

“For communities to match fund you’re talking a lot of money and, in theory, they’re supposed to have it completed by 2015,” – a target Dr Trotman believes even BT will not be able to meet.

The CLA agrees with the principles of funding rural broadband but not with the mechanism used to deliver the funding, he says. “It could have been a lot easier.”

The Countryside Alliance, which says it is doing a lot of work on rural communication issues, agrees the roll-out so far has been “pretty poor”.

“Focusing on speed rather than coverage is hindering the whole process,” says Sarah Lee, head of policy.

BT will now pick up more than 40 local contracts – 18 of which are already signed – despite a number of specialist companies having originally bid.

The government has spent nearly £10m of the £530m fund on external consultants to design and manage the process. However BT, which had a turnover of £4.5bn last year, will receive the rest of the money and match the figure.

The Department for Culture, Media and Sport says it is “confident that the strong framework put in place delivers projects that have real value for money.”

“This government will deliver a transformation in broadband by 2015,” a DCMS spokesman insists.

By then almost 25m UK premises, including those in some of our most remote areas, will have access to superfast broadband and average speeds will be at least three times faster than in 2010, the spokesman says.

“The broadband plan is being swiftly rolled out with at least one new project a week going through the procurement process. This will make a real difference to homes and businesses across the UK.

“The government is keen that there is as much competition as possible for these contracts but has always accepted that there are some projects which are not as commercially competitive due to the scale of work and infrastructure required, the spokesman adds.

The government has put aside £20m – £10m of which comes from DEFRA, the other £10m comes out of the £530m pot – which it says will be allocated to community-run projects. The NFU welcomed the progress on broadband funding but called for more action on community projects.

“We need to see progress very soon with county schemes taking superfast to 90% of their population and we need to see more activity on community schemes part-funded by DEFRA,” he adds.

However, while doubt hangs over the 2015 deadline for having fibre optic cables installed, there is a new technology on the horizon which could be a saving grace for rural broadband.

4G is the next generation of mobile broadband, following on from the current widely used 3G spectrum. It has the potential to reach speeds of 80Mbps.

“4G could offer a stop gap, as it could be ready within 18 months to two years,” says Ms Lee.

The Countryside Alliance has been campaigning on the use of the 4G mobile broadband spectrum as a primary broadband connection for rural people whom fibre optic will not reach before 2015, or at all.

“We had positive results on 10 trials using the 3G spectrum across the country. The mobile network has huge opportunities.”

The government auctioned off the 4G spectrum earlier this year and had hoped to raise £3.5bn, but made only £2.3bn. BT also won part of this spectrum, this time among other bidders, which it intends to use for broadband in rural areas, having trialled the technology in Scotland, Suffolk and Cornwall in the past few years.

The government has also set aside £150m for improving mobile phone networks. Some of this money should be used to consolidate broadband masts and mobile phone masts, says the NFU.

“We need to see construction work by next month to make use of the £150m Mobile Infrastructure Programme fund improving mobile phone services in rural areas, and we need to see more mast sharing so that investment in mobile also helps with broadband, and vice versa,” says Mr Collier.

Improvements in broadband networks are desperately needed for farmers. A 2012 DEFRA survey found half of farmers would use their computer more if they had faster broadband.

While 92% of farmers had broadband, only 32% of had speeds of over 2Mbps, with 6% still using dial-up technology.

Despite this, the farmers questioned were no strangers to technology, with 29% owning a smartphone and the majority of these using the handset for farm business.

While critics say progress has been slow and the funding has not been allocated fairly, it seems rural areas are now slowly being brought into the digital age.

Read more about the campaign