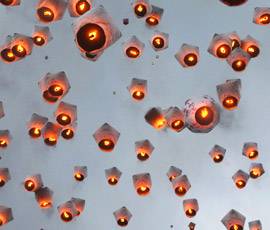 A leading wildlife cameraman has launched a petition calling on the government to ban sky lanterns.

Mark Vinall, who has travelled the world filming wildlife shows for the BBC as well as working for the Discovery Channel and Sky, is urging the government to ban the sale and use of Chinese lanterns across the UK.

Dubbing them as “non-essential, air-borne menaces”, he said the government needed to take action immediately to prevent them doing further damage to farms, as well as to other wildlife and to aircraft and coastguard services.

“It makes me angry that people don’t think before they act and don’t consider the consequences,” Mr Vinall told Farmers Weekly.

“They don’t think about where they might land and what happens to the metal.

I’m hoping this petition will at least raise some awareness about the problem.”

The petition, which needs 100,000 signatures before it will be eligible for debate in the House of Commons, is open until 22 August 2012.

Its launch came after the NFU repeated its calls for people to think twice about using Chinese lanterns.

“We would just like everyone to think twice about using lanterns because they really can cause harm and sometimes death to animals, as well as damage to crops and the environment.”

DEFRA has so far ruled out banning the lanterns, but in Wales assembly member Antoinette Sandbach has launched a legislative bill to restrict their use.

Speaking last month, Ms Sandbach said nobody wanted to be a killjoy, but releasing lanterns put people, farm animals and property at risk.

“While the lanterns are airborne they can be mistaken for marine distress flares and have the potential to damage aircraft,” she added.

“It is my hope to introduce legislation to restrict their use and in doing so safeguard members of the public and farm animal welfare.”

Watch the video of Jim Paice speaking on sky lanterns

Join the conversation on a forum on sky laterns