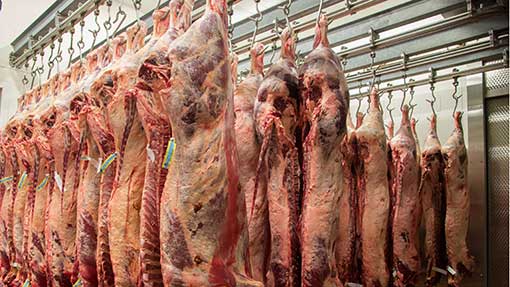 The quality of prime British beef carcasses improved during 2013, with 3.8% more reaching the target grade of R4L or better than in 2012.

According to the latest annual results from EBLEX, based on a sample of more than 430,000 prime cattle, 55% of carcasses met the “R4L or better” target. This was achieved despite an increase in dairy-bred bull-calf registrations.

“More detailed analysis shows there were large improvements in both steer and heifer carcasses classifying R4L or better, with young bull carcases slightly improved from 56.7% to 56.9%,” said the report.

However, 20% of heifers were still finished at fat class 4H or higher; significantly more than any other type of prime cattle. “Although this is a 3% reduction from 2012, the evidence suggests that target fat class in heifers is being sacrificed by chasing higher weights,” said the report. “Ensuring cattle are slaughtered at the target fat class will result in savings in feed costs, as fat deposition requires four times more energy than lean tissue.”

Average prime beef carcass weights fell slightly, to 335kg, with all stock class weights down by between 1kg and 5kg compared to 2012.