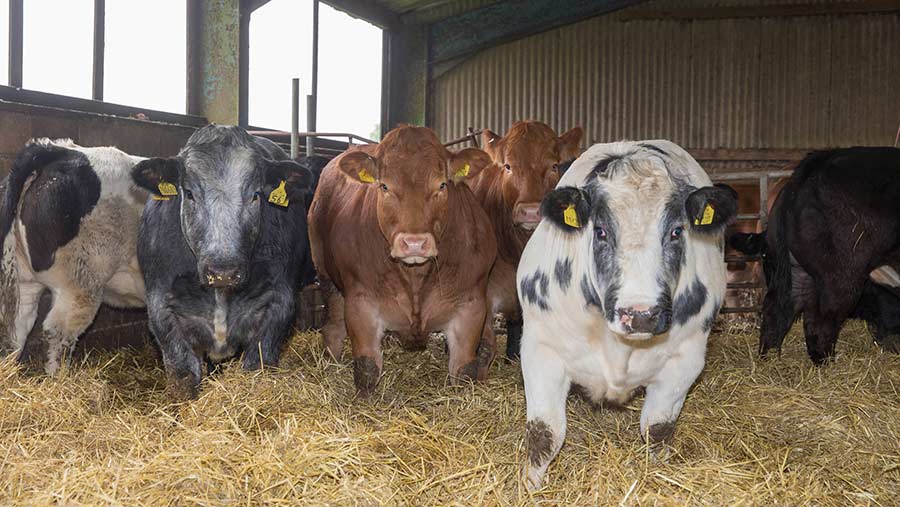 Beef farmers are losing close to £1/kg for each beast produced after being trapped between rising production costs and rock-bottom prices.

Fresh AHDB data has shown the average deadweight cost to produce a kilo of beef has risen by 19p in the last year to £4.37/kg for the middle 50% of herds, with variable costs making up £3.92/kg of that.

With the deadweight R3L steer average at £3.39/kg for the week ending 13 July, that means the average fat cattle producer is losing close to £1/kg or more than £320/head for a 330kg carcass.

See also: Finishing bulls v steers: Which is best for your farm?

AHDB lead analyst Duncan Wyatt said that variable costs were the driver behind the increase in costs, with inputs like feed and paid labour rising in 2018/19 compared with the previous 12 months.

In contrast, other fixed or non-cash costs had remained more stable over the same timeframe, he said.

The deadweight figures also highlighted that the top 25% of producers managed to limit cost rises to15p/kg. This led to a significant and widening gap between the top performers and the middle 50%.

Indications suggest that compared with the middle 50%, the top 25% are:

The top 25% purchased cattle at average liveweights of 303kg and sold at 611kg lw, achieving a daily liveweight gain (DLWG) of 0.82kg.

Although the middle performing 50% of herds achieved the same 0.82 kg DLWG they bought cattle at 344kg lw and sold at 598kg lw.

“But although we have no data on forage mix or quality, in general, we usually find that those who are focused on detail will be making or purchasing forages of better quality, resulting in less quantity fed,” Mr Wyatt said.

“They will also usually be ensuring that the rations are mixed to the needs of the cattle and, therefore, the quality of the concentrates fed will be matched to complement the forage,” he added.

This is not always the case for others who fail to pay attention to making a quality forage and may not have forage analysed, Mr Wyatt suggested

Labour use per head of output equated to 7.5 hours for total paid and unpaid work on the top 25% of farms.

By comparison the middle 50% used a third more labour per head of output at 10.6 hours, Mr Wyatt said.

“The amount a producer may be losing will depend what beef selling price is achieved but the top 25%, on average, achieve a higher price per kg DW than middle-performing farms.

This could possibly be due to quality of carcass and therefore more specification bonuses or fewer penalties,” he added.