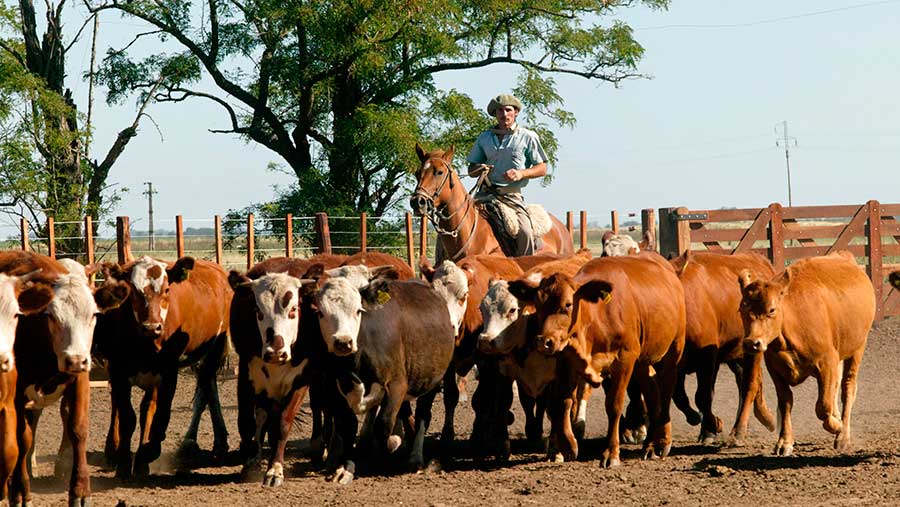 European farm leaders are battling plans to give South American countries greater access to the EU’s beef market in return for the EU being given more open access to their car and dairy markets.

The EU is in the final stages of negotiations with Argentina, Brazil, Paraguay and Uruguay in order to secure a new EU-Mercosur trade deal.

The EU says a future agreement will represent a win-win for both sides, creating opportunities for growth and jobs.

But European farm leaders have reacted with horror to the news that the EU has upped the amount of beef it would be prepared to see imported with reduced tariffs applied from 70,000t to 99,000t.

This would be in return for an end to prohibitively high tariffs on EU exports of goods such as cars, machinery, dairy products and wine to the South American trading bloc.

“Now is not the time to propose this when we do not know the impact of the talks of the exit of the UK from the EU,” he said.

“With 52% of Irish beef destined for the UK market, we cannot put further pressure on the EU beef market in a trade pact with the Latin American countries.”

Mr Fleury also pointed out the commission’s own monitoring had shown that some of the Mercosur countries had been unable to respect the EU’s phytosanitary rules.

Barclay Bell, president of the Ulster Farmers’ Union, agreed the EU Commission had already conceded too much ground to the Mercosur countries.

“There seems to be no regard for the impact on food safety standards or the economic impact on European farms,” he said.

“These countries have no interest in adopting European traceability standards.

“They do not comply with EU animal welfare standards and Brazil in particular has not dealt appropriately with a huge food fraud incident involving rotten meat.”

Mr Bell said if a deal was struck it should not be at the expense of an industry that was the backbone of rural communities.

The negotiations must also not set a trend that is considered acceptable by the UK government for any future trade deals, he added.

The fear within parts of the EU is that any increase in beef imports from South America could lead to significant market disruption, particular if extra access is grated to high-value cuts of meat.

Analysis carried out by the NFU in 2016 concluded that while reducing tariffs for dairy products might open up some opportunities for EU exports of high-quality cheese to Mercosur counties, the opportunities for the UK were limited.

Overall, its conclusion was that in agricultural terms, Mercosur countries represented “a serious threat more than an opportunity for EU farmers” due to the lower cost base and production capacity in South America.

Meanwhile, it has emerged that some of the UK’s trading partners may seek trade concessions from Britain during any post-Brexit transition period.

During this period the UK will be required to abide by existing EU trade agreements, but third countries will not be bound to do the same.

It is understood that South Korea and Chile may seek concessions in the agricultural sector as a result.