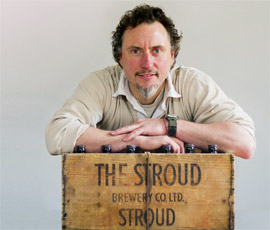 Those were just a few of the words food and drinks guru Nigel Barden used when he tasted the entries for the Farmers Weekly Best Rural Beer Competition 2012, eventually settling on our winner, Five Valleys ale brewed by Greg Pilley (pictured).


Nigel was in our offices, sipping his way through the scores of entries. Britain’s farmers, we know, grow some fabulous malting barley. Country people enjoy a tipple. And there are some wonderful microbreweries in rural areas, many of them on farms. So we put the three together and came up with this competition – a unique way to celebrate the quality and diversity of these products. Soon, recommendations were flooding in. Some brewers nominated their own products, others were put forward by happy customers who were fans of their wares.


Britain’s small-scale, regional beer industry is, after all, experiencing a renaissance. It’s a fallacy it’s just quaffed by middle-aged men with beards and wool sweaters – in fact, it’s enjoyed by men and women of all ages and backgrounds.


There’s a growing interest in local beers, in the way there has been in local foods and The Society of Independent Brewers (SIBA) reckons annual production among small brewers is growing by around 10%.


Our wonderful local beers are the perfect complement to the wonderful local food produced by so many farmers.It’s also increasingly enjoyed in a range of different situations, circumstances and occasions. People are appreciating beer, savouring it. Like wine, it’s got its own vocabulary. Beer, in short, is cool again.


Our expert tester, Nigel, spent a morning tasting all the entries. Radio 2 listeners may well have heard him talking about the subject on Simon Mayo Drivetime.


It was a “blind” tasting, with each offering numbered and poured out of sight. He was interested in the nose, the taste and “the journey south into his stomach”, the beer ideally “ending up in my gut like a happy Buddha”.

Nigel remembered only too well the industry’s bad old days. “We nearly lost our brewing tradition. It wasn’t so long ago people drank the same beers all over Britain and they tasted consistently the same: rubbish.


“But there’s been a real renaissance in the past decade. And it’s not surprising, given we grow such good ingredients in the UK.”

Eventually, he came up with a shortlist of eight and from it his overall winner, Five Valleys from Stroud Brewery. 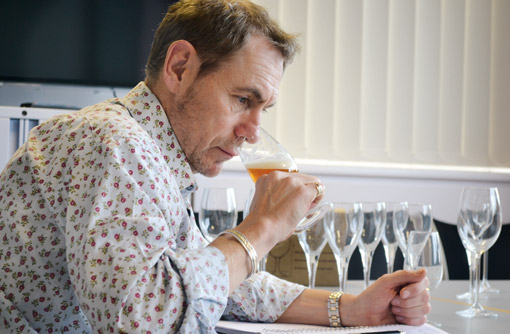 It was a pleasure tasting my way through such a strong field of entries, although with 50 of them, I did have to pace myself. Fortunately the Farmlife team were on hand to rub my stomach every half hour, as George Kennedy did to Paul Newman in Cool Hand Luke as he ate a similar number of boiled eggs! Emptying the spittoon was less pleasant.

“It’s marvellous that so many brewers are keen to share the provenance of their grains and hops. A fair number of the breweries are situated on farms, some of them setting up microbreweries to bolster their agricultural portfolios.


“Although beer sales are declining in the UK, real ales are still on the increase and thankfully we now have more than 1,000 breweries, many of them on the micro scale. In 1970 we were down to a measly 140.


“Growing up on a Lancastrian beef and sheep farm, it’s been a more recent joy getting to know about the world of grain. It’s great that our home-grown barley and hops are being put to such tasty use.”


Where the surplus went

You probably think we took it home or squirreled it away for the Christmas party, don’t you?

Both were tempting – but we sold it and donated the proceeds to The Katie Haines Memorial Trust, a charity that raises awareness of the dangers of carbon monoxide (CO), set up by former Farmers Weekly team member Avril Samuel after the tragic death of her daughter Katie.

Each year in the UK up to 50 people die and more than 4,000 are poisoned by this odourless, toxic gas, known as the “silent killer”. CO is produced by incomplete combustion of fossil fuels used in central heating systems, gas appliances and fires such as mains or bottled gas, coal and wood and petrol, oil or paraffin – so farming families should be aware of the risk and have an audible CO alarm.

We’ve launched an online map to identify rural breweries and help you find ones in your area. Find it at www.fwi.co.uk/beermap and if you want a brewery added, email fwfarmlife@rbi.co.uk.