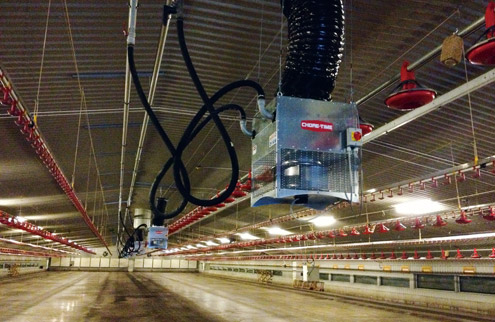 One Derbyshire poultry producer is receiving an additional income of £250,000 a year thanks to the installation of 11 biomass boilers.

The six-digit extra revenue through the Renewable Heat Incentive (RHI) scheme was enough of an incentive on its own to warrant the £1m investment at Overbrook Farms last October, says farmer David Allsop.

However, the benefits to the business – which is on track to produce 6.5 million birds a year – are even more far-reaching. The boilers are also saving the company £90,000 a year in fuel costs, while helping to boost bird productivity. But such head-turning figures are only achievable by maximising the rewards available for biomass, says Mr Allsop.

“It’s crucial to ensure you’re maximising the RHI tariff received for every boiler,” he says. “The RHI tariff pays a top rate of 8.6p/kWh up to 250,000kWh produced, after this it drops to 2.2p.

“To get the most of the higher tier-one payments, you need the right size boiler for the right square metres of poultry shed. By doing so, each boiler earns you at least £25,000,” he says.

To make the most of the top payments, the farm also decided against installing one large boiler, and instead opted for 11 199kW boilers, to heat 23 sheds spread across three farms.

Boilers of under 200kW are eligible for the highest tier payments, whereas larger boilers receive a significantly reduced tariff.

Putting in 11 boilers, rather than one large one, also reduces the risk of the whole heating system breaking down if one boiler fails.

The farm’s original gas heating system remains in place and is available as an automatic backup in case any of the boilers fail. Heat generated by the biomass boilers is distributed into the shed via heat exchangers, with varying numbers of exchangers in each building, depending on the size of the shed.

The sheer size of the business underlines the importance of maintaining a consistent environment and maximising performance. Birds enter the system at a day old and are sold to Moy Park at an average weight of 2.25kg at 36.5 days old. Shed temperatures start at 34C for the youngest chicks and gradually reduce to 21C by day 35.

Mr Allsop says an added benefit of the biomass system versus gas heating is reduced carbon dioxide production. This not only helps reduce the farm’s carbon footprint, but also gets chicks off to a better start.

“Carbon dioxide suppresses chick growth in the first week, so the more we can reduce it, the better,” he explains. “In general, since installing the biomass boilers, bird welfare and performance has been enhanced. The litter is also a lot drier.”

Selecting the right type of fuel is also a big consideration during installation, says Mr Allsop.

“We wanted an easy-to-manage fuel that was easily available in the area. We opted for an EN+ wood pellet with a high calorific value that has low moisture levels and burns clean. The pellets are blown into a silo and then automatically fed by auger into the boilers, meaning it’s hassle-free.”

The pellets cost 3.8p/kW versus 5.5p/kW when the sheds were heated by gas, bringing a saving of 2p/kW, regardless of RHI payment. “When I get paid 8.6p/kW I’m quids in,” Mr Allsop says.

Fuel options for biomass boilers include wood pellets, wood logs and woodchips, as well as straw pellets, which can offer a cheaper fuel source for those with access to the raw material.

Every business with a high reliance on generating heat could benefit from biomass boilers, says Mr Allsop.

“Every business needs to reduce their carbon footprint. We also need to reduce carbon dioxide emissions to get chicks off to a good start, so we’re killing two birds with one stone.”

Such is Mr Allsop’s commitment to the biomass concept, he has added a further three boilers to the existing set-up to further maximise the RHI tariff received. The business is also currently building two new sheds, which will be serviced by an additional two boilers. This will bring the total to 16 boilers across 25 sheds.

The day-one capital cost of installing biomass equipment is often the main stumbling block for farmers considering different renewable options, but there are ways to make such a project viable.

“Banks will generally ask for security from farm assets, which many producers are uncomfortable to do,” he explains.

“Lombard understands the technology and we are able to finance the project by using the biomass boiler as security.”

Mr Allsop says when he looked into installing his 11 biomass boilers at the end of last year, there weren’t many companies wanting to finance him.

“Lombard agreed to give us a loan secured against the broilers and we bought the 11 boilers and 100 heat exchangers to go over our three sites,” he says.

“Whereas many companies would have made me have 11 different financial agreements, the attractive part of this loan was the fact they let me have one finance agreement. This made it very clean and straightforward.”

Asset finance with Lombard can be taken out over a maximum of five years, with the farmer paying the VAT and putting down a minimum 10% deposit. Money is loaned for the whole project including installation.

There are several types of asset finance but in this case it essentially refers to lending that is secured against the assets funded.

The existing business must show it can service the debt, says Mr Sonpal. “We don’t take RHI or fuel savings into account.”

In Mr Allsop’s case, he came to an agreement with Lombard where he financed and installed the system himself and was then reimbursed the £750,000 at the end of the project. This will now be paid back in quarterly instalments at an interest rate of 6%.

Mr Sonpal explains that, as part of any agreement, the producer must also source the biomass boiler from a reputable company that has been vetted by Lombard.

“Italian, German, Danish or Austrian brands are good as they all have UK subsidiaries and parts and maintenance can be sorted easily,” he says. 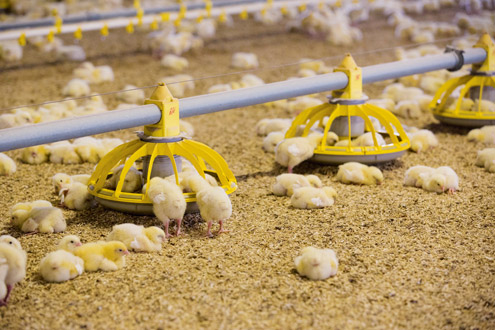