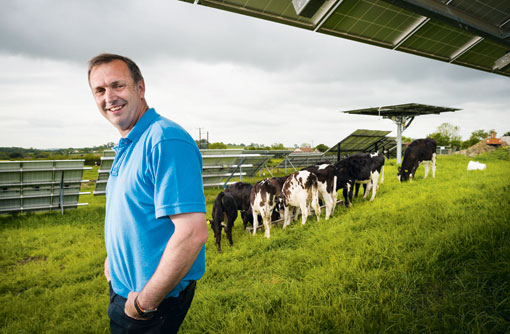 As dairy producers continue to feel the squeeze, making cost savings is crucial to making as much money per litre produced as possible.

For Somerset farmer Steve Edmunds, renewable energy is an integral part of his business, with the farm acting as a renewable energy demonstration farm for farmer co-operative Mole Valley Farmers.

Developed in conjunction with Mole Energy – the energy division of Mole Valley Farmers – and boiler manufacturer Woodpecker, the Heatbank is a self-contained biomass hot water module packaged on one metal pallet frame.

“We are trying to get it as near to plug and play as possible, so you have 100% of the equipment and 90% of the install with one pallet,” says Mr Edmunds.

Manufactured in the UK, it has been designed to be as simple, quick and cheap to install as possible, he adds. It just needs electrical and cold water connections, a flue set up and the hot water connected to the existing hot water tanks.

Farmers are advised to install the system in a dry, warm or well-lagged room with a short run to the existing hot water tank. Ideally it should be in the same building as the dairy, with space for fuel nearby – the system is run on wood pellets.

“It’s a very simple system because if it fails, the normal boiler will go back to heating the water. The biomass boiler will struggle to get it above 80C so you still need the thermostat,” says Mr Edmunds.

The system is MCS (microgeneration certification scheme) accredited and designed to make the Renewable Heat Incentive application process easier, as it should allow farmers to only require one heat meter for the system.

Total cost for the system including installation is approximately £12,500. It is available through Mole Valley Farmers.

The system is designed to bring financial, carbon footprint reduction and hygiene benefits.

“The Heatbank is the only thing we have ever invested in on the dairy farm that gives you a direct income,” says Mr Edmunds.

“It’s a nice, simple, relatively cheap way for farmers to get into renewables – we are taking away a running cost and turning it into an income. How you do in the marketplace depends on how profitable you are. If you have a bad dairy year, your renewables still carry on.”

He estimates the Heatbank will save the farm business £360 a year on electricity costs alone, based on milking a 220-cow herd and washing down the parlour twice a day.

Daily measured figures so far are £2.87 spent on pellets and £8.42 earned from the RHI income and electricity savings. This equates to an approximate financial benefit of £5.55/day or £2,000 a year.

“This is at a use rate of 500-600 litres of hot water a day of hot water produced from the Heatbank at 72C and then topped up by the existing immersion heater system to whatever temperature is required,” says Mr Edmunds.

As well as saving on energy costs, Mr Edmunds says that cow welfare has improved, although the reasons for this are hard to pin down.

“Total bacterial count has gone down since we started with this – hygiene can be improved and milk quality will be better,” he says.