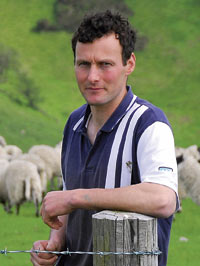 After a tough start to the year, prospects look much brighter at our Management Matters farm in Wales. Paul Spackman reports

With grass growth racing away after recent rain and lamb markets looking reasonably firm, Aled Jones feels a corner has finally been turned at Tregeiriog Farm.

“We never normally get that much grass growth until mid-May, but things were really struggling after the long winter and lack of rain,” he says. “The last snow we had was half an inch on 10 May, but it didn’t last long and grass is racing away now. Lambs are coming on really well and we haven’t got enough mouths to keep on top of it.

“Since January we’ve been chasing our tails a bit, but it’s starting to feel like we’ve turned a corner and are now getting on top of things.”

Spring lambing was generally on par with normal, although 50 lambs were lost in a harsh, cold snap at the end of March, he says. “Losing those lambs outside was enough to make us panic and bring 150 ewes carrying twin mule lambs indoors. Once we got them in they lambed pretty well, but it was a lot more work and we only just had enough straw and cake feed. Lamb numbers would’ve been around the same as last year if we hadn’t lost those 50 early on, but we’re still below our target of 150%.”

The tough winter and early spring has prompted Mr Jones to build an additional “insurance” element into his low-input New Zealand-style system. This spring 14 acres of grass has been set aside to make haylage on. “We never normally conserve anything, but did six acres last year for our few Welsh Black cattle, and have decided that if we get another winter like last year, we’ll need that bit extra to fall back on,” he says.

In addition, a contractor has been brought in to plough and re-seed 13 acres with a grass, clover, chicory mix. At £100/acre it is an added cost, but one that is well worth it, he says. “We did an eight-acre field last year which has been very successful, with lambs coming on really well. We’ve also used the field for problem and lean ewes and seen them recover in no time at all. Now we’ve seen the benefit, we hope to do a bit more each year.”

2010 is also the third year of an ongoing liming project aimed at reducing soil acidity and improving grass quality across the farm. Some 60 acres has been treated at 2t/acre this spring. “The farm hasn’t had lime for a long time and we’ve definitely seen a benefit on the fields we’ve done so far. Grass looks a lot better and sheep are happier to graze.”

Feed supplies for the coming winter will be bought later this autumn, but Mr Jones reckons he will still buy a similar amount of hay (5-6t) as normal, despite the improvements to grazing and conserving more of his own forage.

Mr Jones reckons it will be another fortnight before the first lambs are ready for sale through Oswestry market, so he is keeping a close eye on prices. “Liveweight prices dropped 10p on Monday (7 June) to about 190p/kg, while deadweight prices are somewhere around £4/kg.

“If 30kg lambs are making £60 a head, we’d be tempted to sell because they are pretty low cost to produce. We have some singles already touching 30kg, but they could do with another couple of weeks. We’d normally look to sell the first lambs when they reach the mid-30s [kilograms], depending on price,” he says.

But not everything will be sold through the auction market and Mr Jones admits he tries to go where the best price is rather than have a fixed selling policy. “We’ll keep an eye on live and deadweight prices. A lot of the time we’ll be selling mixed loads of mules, Beulahs and Texels and these tend to go direct to the abattoirs, depending on what price we can get.”

With shearing due to start in the next week or two, Mr Jones welcomes the expected increase in wool price from 40p/kg to 65p/kg this season. “Shearing is one of those things we’ve got to do and are never going to make a lot of money out of it. At 40p we struggle to cover costs, but at 65p we should actually make a bit of profit.”

Tregeiriog Farm will welcome a group of 40 farmers from a grassland group near Abermule this Friday. It is the second group to visit the farm this year. “We’ll take them around the farm and show them our system. People often can’t understand why we don’t we don’t conserve feed or bring sheep in. After the winter just gone, I was starting to question it a bit myself.

“But our system works really well unless you get two foot of snow through the winter. Last winter was the first like it for 30 years, so I don’t think we should change what we’re doing completely just because of it. If every winter was like that then perhaps we would have to change what we do.”