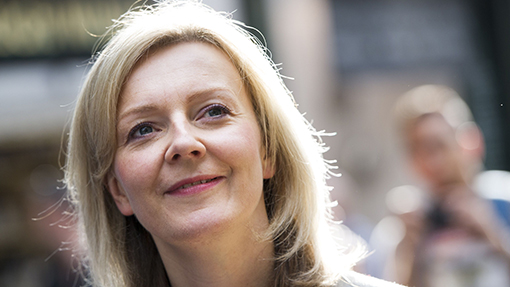 Defra secretary Liz Truss insists dairy farmers have a bright future, despite farmers’ fury over low milk prices pushing many to the brink of collapse.

Ms Truss met board members from Dairy UK, the body which represents farmers and milk producers, to discuss the problems facing the dairy industry.

The meeting was held at Defra’s London headquarters on Wednesday (22 October) in response to the plunge in farmgate milk prices, which has sparked a number of protests over the past month.

Speaking after the meeting, Ms Truss said in a statement that despite the milk crisis, she remained confident the dairy industry had a bright future.

“I understand the concerns of British farmers over the current volatility of milk prices. It’s a global issue, but the long-term picture for the UK dairy industry remains positive,” said Ms Truss.

“We want our dairy industry to be resilient, competitive and profitable on a global scale to ensure a bright future for our quality British dairy products at home and abroad.”

“We want our dairy industry to be resilient, competitive and profitable on a global scale to ensure a bright future for our quality British dairy products at home and abroad.”
Liz Truss, Defra secretary

Meanwhile, Neil Parish, Conservative MP for Tiverton and Honiton, chairman of the Dairy All-Party Parliamentary Group, hosted a separate meeting on the milk crisis at Westminster on Wednesday.

The meeting brought together leading MPs and representatives of the dairy industry, including Dairy UK, the Royal Association of British Dairy Farmers (RABDF), the NFU, and dairy lobby group Farmers for Action (FFA).

The meeting discussed the following issues:

Farmgate milk prices have plunged up to 30% in the past four months, due to a combination of a slump in global dairy commodities, oversupply of milk and the Russian trade embargo on dairy imports from other EU countries.

Many farmers have seen the price they receive for their milk plummet from 34p/litre to 26-27p/litre, which is below the costs of production.

In the past fortnight, FFA has launched a wave of protests against supermarkets and processors over lower prices. The lobby group claims UK dairy farmers should not be feeling the full impact of the global price cuts because lump because 85% of the liquid milk they produce is used in this country.

On Tuesday (21 October), NFU dairy board chairman Rob Harrison issued a rallying call to processors, retailers and policymakers to work together to safeguard the future of British dairy farming.