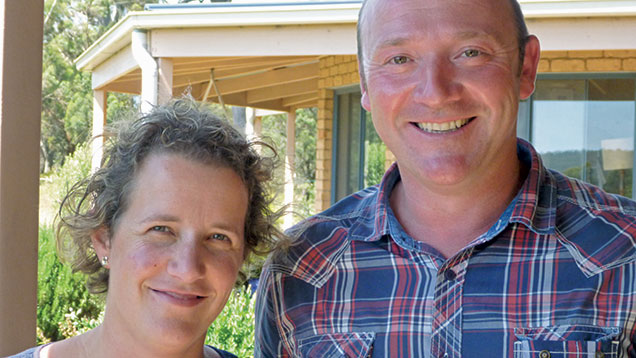 Right now, one British dairy farmer is keenly watching how his grass grows over the summer.

He has a guaranteed milk price until 2017, so doesn’t have to worry about UK supermarkets slashing the in-store price of milk.

But Peter Jones is a long way from home: he’s 10,000 miles from London, on the Australian island of Tasmania.

In June 2012, after managing several herds in the UK, Mr Jones and his family left England for Australia and took over Limberlost Dairy.

He now manages a 780-cow, autumn-calving herd of Friesian cross Jerseys. They are grazing all year on 250ha and are milked in a 50-point rotary parlour, yielding about 460kg of milk solids a year. The whole herd produces about 4.4m litres. The farm has two full-time staff and another part-time.

While working for the business’s three equity partners, Peter has saved enough money to buy the 197ha farm next door. He will now start rearing the heifers off the Limberlost herd and build-up his own dairy.

“In the UK, we saved up a reasonable amount of money but struggled to find anywhere we really wanted to commit to,” Mr Jones says. “There was not really an opportunity to invest any money and then this came up over in Australia.”

At a time when world markets have crashed, Mr Jones has been able to plan the business with confidence. Last June, his milk buyer, Lion Dairy, gave him the opportunity to fix a milk price for one, three, or five years.

“We knew we could take a downturn that was coming because we had locked in at a certain price. We now know where we are.”

The location of Limberlost presents its own challenges. The summer is dry and almost three-quarters of the grassland needs irrigation. When water is low, the nearby vineyards are the priority for water. Careful grass management over the hot months is essential and Mr Jones still uses the Irish software Agrinet to manage his platform.

“It is a lot to get your head around: the irrigation, lack of water, managing a really tight summer budget for grass.” Peter Jones, dairy farmer

On top of grass, the cows are fed a ration of maize and grass silage, brewers’ grain and grain in the winter, and are given hay over the summer.

“To a UK farmer [irrigation] is just something completely out the blue,” he says. “It is a lot to get your head around: the irrigation, lack of water, managing a really tight summer budget for grass.”

Another big difference from the UK is the lack of support payments for farmers.

Mr Jones says this means a focus on profit is essential, especially as he is working for three directors. He is a member of local benchmarking and discussion groups, and estimates he is in the top 10% of Tasmanian dairy farms.

Limberlost has also become a focus farm for levy board Dairy Australia. This means his business performance data will be made public and the farm will host open days for other producers.

“The rules and regulations at some stage will come on more than they are here. But [at the moment] it is so easy,” Mr Jones says. “That’s not to say our welfare is bad, it’s very good. But we don’t get people walking across on the farm and calling up the RSPCA to say we have a lame cow.

“Everybody in the community think that farmers are great in Tasmania.”

Perhaps the reason for farmers’ popularity is the ambitious plan for growth in Tasmania dairy.

The biggest processors have pumped millions into manufacturing capacity in the past few years. An industry strategy called Into Dairy is aiming to boost the territory’s milk production from 800m litres in 2012-13 to 1.15bn in 2018.

That plan would need 65,000 more cows, 450 new workers and a huge amount of capital investment in building new dairy units or converting other farms. Limberlost itself was converted to dairy in 2008.

The average dairy herd size in Tasmania was 336 in 2013 – the biggest in Australia and well above the national average of 258.

As they expand, Mr Jones says some farmers are going down the higher input route, introducing more Holstein-type cows and looking at housing for most of the year.

But he says they might lose focus on the bottom line.

“They are trying to push for more and more litres. But it will be more litres and less profit.”