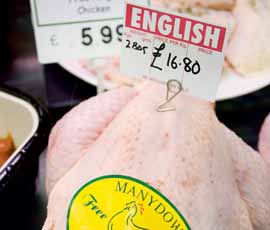 A government-backed drive to boost exports of British food and drink to high growth markets like India and China will be an engine for economic growth, according to DEFRA farm minister Jim Paice.

UK food exports grew by 12% in 2010 to £16.1bn but many markets are still under exploited, DEFRA said. The UK exports more food to Belgium than it does to Brazil, Russia, India, China and Mexico put together and these countries account for 44% of the world’s population.

The Farming, Food and Drink Exports Action Plan, published on Friday 27 January, sets out how the government and industry will work together to open up and take advantage of key markets.

It includes plans for a domestic drive to encourage and support manufacturers to succeed overseas, as well as an overseas campaign to champion British food abroad.

The exports plan was developed by DEFRA, UK Trade and Investment, industry trade associations and top exporters through a forum co-chaired by Mr Paice and Paul Grimwood, chief executive officer and chairman of Nestlé UK and Ireland.

“The UK food and drink industry has an ambitious vision to grow 20% by 2020,” said Mr Grimwood. The industry’s exports have grown in each of the past six years, and the exports plan will drive further export growth in the future.

“Thousands of UK food companies, large and small, can grow their business by exploring export opportunities. The government-backed plan will champion open markets and the removal of trade barriers, and provide small and medium-sized businesses with the support and confidence they need to sell the best of British food and drink around the world.”

The Exports Action Plan will:

• Better advertise the financial safeguards available to protect smaller companies from not being paid, which is a key concern

• Work across government and industry to remove bans on British meat exports, such as beef and lamb to China