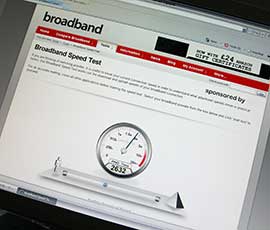 The rollout of high-speed broadband in rural areas is two years behind a government target, an inquiry by the National Audit Office has found.

In 2011 the government pledged to provide internet speeds of 24 megabits a second (Mbps) to 90% of the UK and 2Mbps to all other areas by 2015. It made £530m available to county councils to fast-track the strategy, with the proviso that the money was matched by the local authority. But the audit office has found just nine out of 44 rural areas will have been upgraded by the deadline,

One main reason found for the delay was a longer-than-anticipated approval for the strategy from Brussels. Another was put down to a high number of negotiations around the country to allow the necessary work to go ahead.

It means the rollout has been set back by 22 months for 40 of the areas, with a revised government completion date in 2017. But four areas – Highlands and Islands, Cumbria, Norfolk and Suffolk – might fail to hit this revised deadline because local councils delayed their requests for a share of the available funding pot.

In its report, audit office also raised concerns that BT was the only firm in a position to win contracts and would pocket more than £1bn of public funds in the process.

Of the original 16 bidders only BT and Fujitsu continued to win contracts into 2013. But by March of this year Fujitsu had dropped out as well.

Auditor general Amyas Morse criticised the lack of competition and raised doubts over pledges from the government department to hit the revised targets, saying the government was not strong at taking remedial action to guard against further slippage.

“The rural broadband project is moving forward late and without the benefit of strong competition to protect public value,” Mr Morse said.

He added that the Department for Media, Culture and Sport would have to intervene, along with strong supervision by communications regulator Ofcom to ensure the taxpayer did not lose out.

But BT defended its position. “There was strong competition when prices were set at the start of the process and that has ensured counties have benefited from the best possible terms,” it said.

“Deploying fibre broadband is an expensive long-term business and so it was no surprise that others dropped out as the going got tough.”