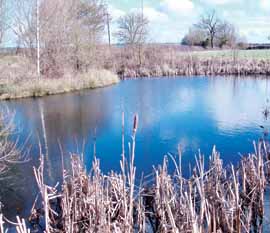 The latest county council farm to come on to the market is the 238-acre Littleton Manor Farm at Waddesdon, near Aylesbury, Buckinghamshire, which will be auctioned on 4 May.

The four-bedroomed traditional farmhouse needs refurbishment and is currently split into two. Littleton also has a detached bungalow let on a Farm Business Tenancy to the former farm tenant. This is in good order but carries an Agricultural Occupancy Condition.

A large range of modern and traditional farm buildings offers potential to refurbish for dairy, livestock or arable use or for light industrial or warehousing subject to planning consent, says agent Matthew Peters of Bruton Knowles.

The sale conditions include a development uplift clause applying for 80 years from the date of completion. This covers the whole of the farm and means that if planning permission is given for anything other than agricultural or equestrian use, half of any increase in value will have to be paid to the county council.

The house and buildings lie in the centre of the mainly level land, which has good field sizes and is in a ring fence with good road access. One of the proposed routes of the HS2 rail line runs just to the north of the farm, which is well placed to supply the proposed new Arla milk plant just south of Aylesbury, says Mr Peters.

Littleton carries a guide price of £2.3m and the price paid at auction will include single payment entitlements, which will be transferred to the purchaser at completion. (Bruton Knowles 01452 880 000)

Sales are continuing in other counties, including Suffolk, which is about to complete on the 44-acre Uplands Farm near Stowmarket. Suffolk will launch Upper Church Farm at Rickinghall later this spring, with 69 acres, a house and buildings but no guide price has been set yet.

TFA chief executive George Dunn said that while county council sales were happening, there was no rush to sell. Somerset had concluded four or five deals with sitting tenants for them to buy their farms and was negotiating with a similar number on compensation for them to quit. However, the outcome of these negotiations would not be known until later this year.

Gloucestershire expects to sell six of its 88 farms and four blocks of bare land over the next four years as they become available. Poole Farm, Tibberton, with a five-bedroomed period brick and timber house, plus buildings and 23 acres, is expected to be put on the market next month.

North Yorkshire has had a policy since 1997 of selling farms as they become vacant but currently has none on the market.