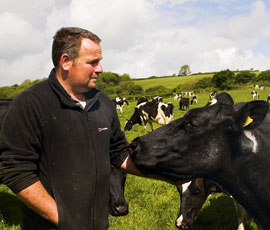 It takes dedication and plenty of hard work to forge a career in the dairy sector from scratch. But, taking it step-by-step and building equity as you go could be the answer, as Debbie James discovers from one Pembrokeshire farmer

The traditional pathway of progression in the UK dairy industry is being challenged as young people look for opportunities for equity growth.

Farm business tenancies (FBT) and equity partnerships represent opportunities to prospective farmers as outside investors buy land or retiring farmers seek alternatives to generating income without cashing in their assets.

For Jason Phillips this structure gave him the chance to establish his own business. He was working as a farm labourer when he was offered a contract farming agreement. The chance of an FBT followed and this has enabled him to now run his own herd of 440 dairy cows.

Although Mr Phillips was brought up on a dairy farm in Pembrokeshire, the family business was not big enough to support both him and his brother, so after gaining a certificate in agriculture he spent 16 years working as a general labourer on two dairy farms within 25 miles of his home.

He had applied for county council farm tenancies and, although shortlisted, he failed to make the interview stage. While he was working on the second farm he met a London accountant whose family had invested in a local dairy farm and he was offered the opportunity to run it through a contract farming agreement.

Mr Phillips had built up enough savings to buy 25 cows and machinery. “I also put in the labour and the owner supplied 100 cows, the land, milk quota and infrastructure,” he says. “As his cows left the herd I replaced them with my own.” Through the contract farming agreement he received a share of the profit through a divisible surplus on top of his “contracting charge”.

After four years he had built up a herd of 80 cows and machinery and was debt-free. This put him in a strong position when he was offered a five-year FBT on a 160ha (395-acre) dairy farm in Carmarthenshire. An agricultural consultant with whom Mr Phillips had established contact knew he was keen to progress and approached him with the opportunity of the FBT.

With four years of trading accounts, Mr Phillips was in a strong position when he sought financial backing. However, his existing bank turned him down when he applied for an agricultural business loan, but he got the backing of Lloyds TSB.

With the 80 cows he already owned he was able to start milking with a herd of 260 cows at East Regwm Farm, near Whitland. He installed ACRs in the 24/48 swingover parlour, established the cow tracks and water system he needed to run a grass-based system and drilled a borehole.

He pays an annual rent and any capital costs are split equally between him and the owner. “I don’t mind investing in someone else’s farm, as long as that investment works for me and I get a return from it,” he says.

Mr Phillips gradually took on more land and cows and is now milking 440 New Zealand Friesian cows. He believes the system he adopted was ideal for his situation. “It had to be a simple grass system to start off; I couldn’t have done it any other way. The only investment I have had to make in machinery is in two tractors, a fertiliser spinner and a trailer.”

He is not planning to increase cow numbers but will reduce the herd size to 400 on the advice of his consultant. “We have done the figures and I have got to the point where it doesn’t justify keeping the extra cows because of the costs and restrictions on shed space. If I reduce numbers slightly I won’t need to rent as much land, basically I will make more money from less cows.”

He believes money spent on a good consultant is a wise investment. “My consultant was able to get me the best price for my milk when I signed with a new buyer because he understood how the system worked and has been a fantastic source of knowledge and advice. A consultant may seem like an expensive luxury but it really does pay, especially in the first 12 months.”

Not all plain sailing

Mr Phillips’ biggest setback since establishing the business has been bovine TB. He has been under movement restriction for three years and with each test he has lost up to 30 cows. Fortunately he has used sexed semen on his heifers and second calvers and has had sufficient replacements to maintain the herd size. He has just had the all-clear on 200 beef cattle which he will now sell to release money into the business.

Farm ownership is on Mr Phillips’ list of goals and he believes it is achievable in the future.

He admits his progress up the farming ladder has not been easy. It has been a challenge, both physically and mentally. He works from 3.30am to 7.30pm seven days a week and would advise anyone with similar ambitions to take the plunge before they turn 40. “I’m 39 now and my only regret is that I didn’t do it sooner,” he says. “I know I am working long hours right now but if you don’t put in the hours at this stage it might not work. The long hours don’t bother me because this is all I have ever wanted to do.

“For me the biggest challenge was going from small to big. I still milk twice a day seven days a week. I don’t have to do this but I am happy with the situation and it gives me an element of control. Because they are my cows and I want the best from them I look after them 100% so my replacement rate is low.”

Mr Phillips says his membership of a discussion group, the Herdsman’s Group, when he was working as a farm labourer gave him the confidence and foresight to look for opportunities.

“You need to be mixing with the right people. The people I met at the Herdman’s Group all had forward-thinking, inspiring employers,” he says.

John Allen, of Kite Consulting, agrees that it is helpful to have the right contacts because opportunities for contract farming or FBTs are not that common. “There are opportunities out there and being involved with the right people does help,” he suggests.

Although Mr Phillips did find a bank to back him, it is now more difficult to secure loans. He owned a property and cows when he sought finance for the FBT. He had the security of those against very little borrowings and was able to get variable and fixed loans to buy the herd already on the farm. But banks are getting far tighter, says Mr Allen.

Realism about what can be achieved is important too, he reckons. He warns potential FBT applicants against over-borrowing. “People can get carried away with the grand vision of milking 500 cows and take out massive debt and sometimes they will fail. Anyone climbing the ladder should take it one rung at a time. With that approach they will get there eventually.”

Getting ahead in the dairy sector

• Get experience on someone else’s farm before going it on your own. Build equity in cattle while you work

• Invest in cows before land and buildings. Buildings and equipment depreciate but cows don’t. Cows are also a flexible investment as they are relatively easy to buy and sell

• Build up a positive credit history and get references from farmers

• Do it yourself whenever possible. Production costs can be controlled if you are willing and able to do more instead of hiring someone else to do it

• Buy used equipment and maintain it

• Don’t get too deep into debt