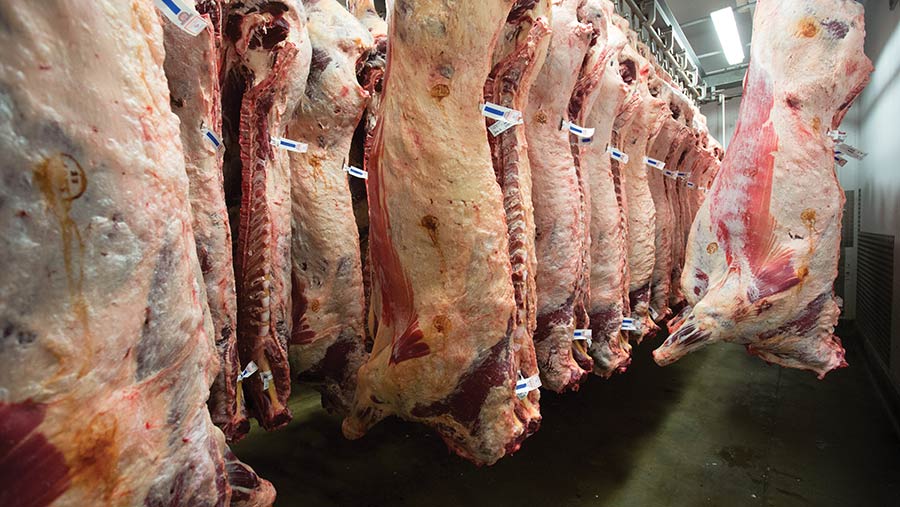 Most livestock farmers who sell direct to slaughter have a tale or two about a time when their kill sheet threw up a few surprises, leading to penalties they weren’t expecting.

While few of these cases end up in a serious dispute, farmers are being reminded of a complaints process that is open to them if their abattoir uses an independent grader.

These are on-site at the majority of abattoirs and are provided by Meat and Livestock Commercial Services (MLCSL), which has been a privately owned company for almost two years after being sold by the AHDB in December 2018 for £1.3m.

See also: Guide to understanding a beef killing out sheet

It is now in the hands of Vorenta, part of HallMark Veterinary & Compliance Services, which provides veterinary services to the public and private sectors.

Since privatisation, the MLCSL has been overseen by the Carcass Classification Scrutiny Committee (CCSC). This is a cross-industry group made up of members of farming organisations such as the NFU and the National Sheep Association, and abattoir trade body representatives.

It is tasked with scrutinising the classification performance of graders against an agreed quality standard. This includes measures of recruitment, retention and training of classification personnel and the requirement for all personnel to be checked regularly for proficiency and consistency.

CCSC co-chairman Andrew Loftus says that all graders are tested at least once a quarter to verify they are classifying carcasses correctly.

“We want to say to farmers that there is independent scrutiny,” he says. “If they have a problem, they should raise it first with the processor concerned, but if they are not satisfied they can complain direct to the committee.

“I am not trying to find problems – indeed, we believe the system functions well – but we want producers to know there is an agreed standard with independent oversight.”

Farmers who wish to raise a complaint directly with the CCSC can download the feedback form from MLCSL’s website. All complaints are treated confidentially, and those making them will be informed of steps taken in response.

Previous complaints reported to the CCSC have resulted in important changes to processes in some abattoirs.

Mr Loftus said that when it left AHDB control, retaining farmer trust in MLCSL had been a key industry concern, with some fearing that standards would slip.

However, in the past two years there had been a gradual increase in the number of licensed classifiers recruited and retained by the firm, he said, as well as significant investment in training and checking.

While the work of the CCSC has until now been focused on standards of conformation grading, co-chairman Andrew Loftus said his ambition was now to turn to other aspects of grading that fall within its remit.

This includes analysis of carcasses “not dressed to spec” – sometimes noted as NDTS on a kill sheet.

Abattoirs are required to trim carcasses to a certain spec, and Mr Loftus says it is adherence to this requirement and how it is being reported back to farmers that needs more analysis.

Carcasses that are not trimmed enough could end up being graded as fatter than they should be, while those which are trimmed too hard could see up to 4kg cut off a beef side which the farmer should have been be paid for.

Mr Loftus says ensuring a consistent level of grading and trimming between abattoirs allows farmers to make a fairer comparison between the base prices of two or more rival firms.