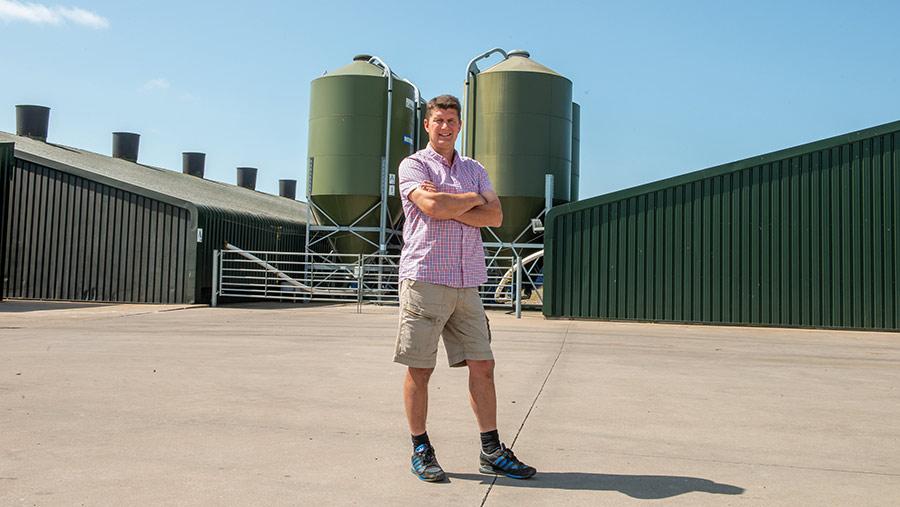 A business capable of supporting the next generation is a key goal for Vaughan Hodgson, who farms 244ha of arable and grassland at Kirkbride, near Wigton, Cumbria.

Mr Hodgson farms in partnership with wife Sandra, father Geoff and mother Dorothy. His two sons – Karl, 24, and Ryan, 21 – are also involved full time with the business. Daughter Samantha is due to take her A-levels next year.

See also: How to run a successful farm diversification

“It’s always been at the back of my mind that I would like to support my two sons when they came home,” he says. “Hopefully, we’re moving towards that – although we’ve haven’t been able to achieve it completely by farming.”

Farm enterprises include 142ha of cereals and 100ha rented out grassland. All land is owner-occupied. The farm also operates a poultry business, contracting and mechanical engineering business, including fabrication.

There are two broiler sheds, each with 60,000 birds on six cycles a year. The birds go to a local processor.

Planning permission for a third shed has been granted, but Mr Hodgson has not yet put the plan in action because the sector was hit badly by the Covid pandemic.

The farm currently receives a basic payment of about £55,000. Phasing out the Basic Payment Scheme over the next seven years will put pressure on arable margins, says Mr Hodgson.

Mechanical engineering and fabrication is Ryan’s strength. An expanding business, it generates much-needed additional income and complements the arable enterprises – servicing machinery for the farm as well as for local contractors.

Karl concentrates on the contracting side – including a self-propelled McConnel sprayer covering up to 9000ha annually.

Again, it generates additional revenue and means the farm can run a bigger machine than it would otherwise justify.

Mr Hodgson says he has spent the past 10 years using his basic payment to expand the farm and help repay a land purchase made a decade ago. Now the loan has been repaid, he is looking for other opportunities.

“We concentrated on paying that down – especially when we became aware that BPS was going to be removed.

“We’ve achieved that goal in the sense that we are now free of any borrowings, so we feel reasonably confident going forward.

“We like to do a mix of things. I wouldn’t call it diversification as such – it is more a natural progression that stems from the core farm business. We are very farming orientated, but we are aware that we still haven’t fully diversified.”

Top of the list is a renewable energy project. “We feel a little bit behind the curve because technology is moving forward all the time. So we are investigating a range of options – I’m open minded. It might be solar, wind or anaerobic digestion – or a mix of all three.”

An anaerobic digestion plant would probably have bigger benefits, says Mr Hodgson. But it would require a larger investment and a longer payback period.

“Whatever we choose, it must pay for itself, be reliable and help achieve the climate change goals everyone wants.”

Alongside this, Mr Hodgson hopes to make the farm more resilient to increasingly unpredictable weather. It is situated in one of the wettest parts of the country, and the 1,250mm of annual rainfall does not fall evenly throughout the year.

“Extreme weather events are one of our biggest concerns. We had three or four absolute downpours last August and September – our rape had established well and looked fantastic, but the fields flooded and it hit yields.

“But if you get 50mm of rain in a single event in August when your crops are establishing, it just rots the seed. It’s difficult to mitigate something like that.”

The overall aim though remains to make the business as a whole more sustainable – not just now, but for the future. “The ultimate goal is to have a profitable business that works in harmony with the environment – not against it.”

Vaughan Hodgson is one of our Transition Farmers. Join them as they strive to become financially and environmentally sustainable and how they intend to overcome the challenges they face over the next five years.