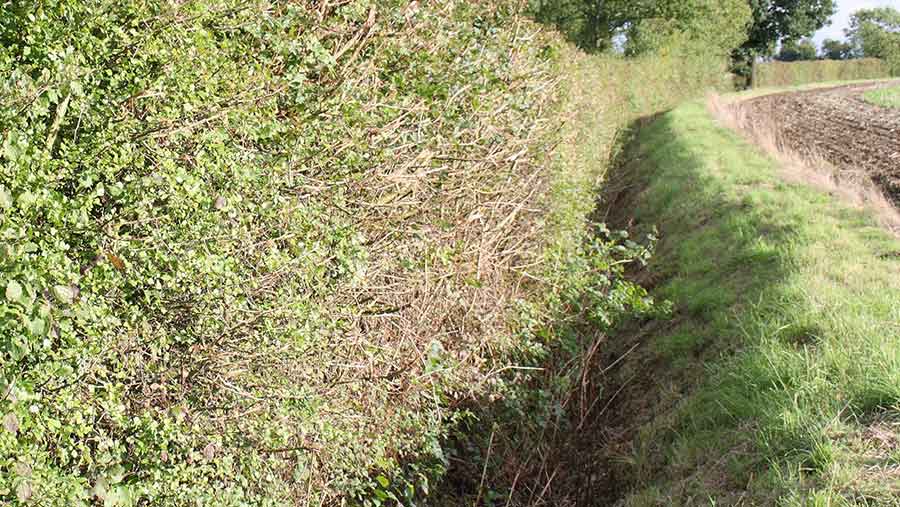 Q Please can you clarify something which I believe stems from the practice of establishing ditches by hand?

If the soil was thrown on to one bank and was of poor quality, then a hedge would probably be planted on it. This established ownership in many cases – that is, the hedge owns the ditch.

In general agricultural use, wherever hedge and ditch were together, unless there was agreement to the contrary, the hedge owner claimed the ditch.

If the latter, what is the position if one owner wants to clean out the ditch? What about access over the neighbour’s land?

See also: Business Clinic – neighbour’s water and slurry drain on to my land

Also, if the ditch is the boundary between two properties and the deeds contain no information to identify ownership, is it normal practice to assume “hedge claims ditch” – again, where is the dividing line?

A There is a presumption that where two agricultural properties are divided by a hedge and a ditch or a bank and ditch, the boundary is along the far side of the ditch from the hedge or bank.

In reality it is two presumptions: the first being that the ditch was dug after the boundary was drawn; and the second that a landowner would cut the ditch at the very extremity of their own land, throwing the soil back onto their own land to create the bank on which a hedge may then be planted.

Both presumptions can be rebutted by evidence showing a contrary position.

As you will see, the first presumption is that the ditch was dug after the boundary was drawn. Therefore, the boundary itself is already established and the hedge and ditch are merely evidence of it.

Although it is usual practice to apply the hedge-and-ditch rule to confirm boundary ownership, the presumption applies only where there is no conflicting evidence: namely, if the deeds clearly set out the boundary position and ownership, this will take precedence over any presumptions.

There are exceptions to the hedge-and-ditch presumption – for example, if the ditch is natural, if there are two ditches either side of the hedge or where the land was conveyed/transferred by reference to an ordnance survey plan.

Moving away from the hedge-and-ditch scenario, a boundary feature’s ownership is dealt with in the same way as any other boundary – for example, a fence. If there is no indication as to ownership, the presumption is that it is party (shared).

A plan usually prevails over other presumptions that might otherwise apply, unless the plan is for identification purposes only, and in that case the wording of the document takes precedence.

Where land is registered, almost all Land Registry title plans are prepared under what is referred to as the “general boundaries rule”.

The rule means that the exact line of the boundary of a property will be left undetermined by the Land Registry unless an application is made for the exact boundary line to be fixed.

If there is any doubt or lack of clarity about the ownership of a boundary, such as a hedge and ditch, the owners involved can do a boundary agreement and register this with the Land Registry.

An OS map would be needed at a scale that allows accuracy when marking the boundaries on the title plan.

If one neighbour needs access to another’s land for works, such as clearing a ditch, it is usual for neighbours to discuss this and come to an arrangement.

There may be a right granted in the title deeds allowing access and regulating it.