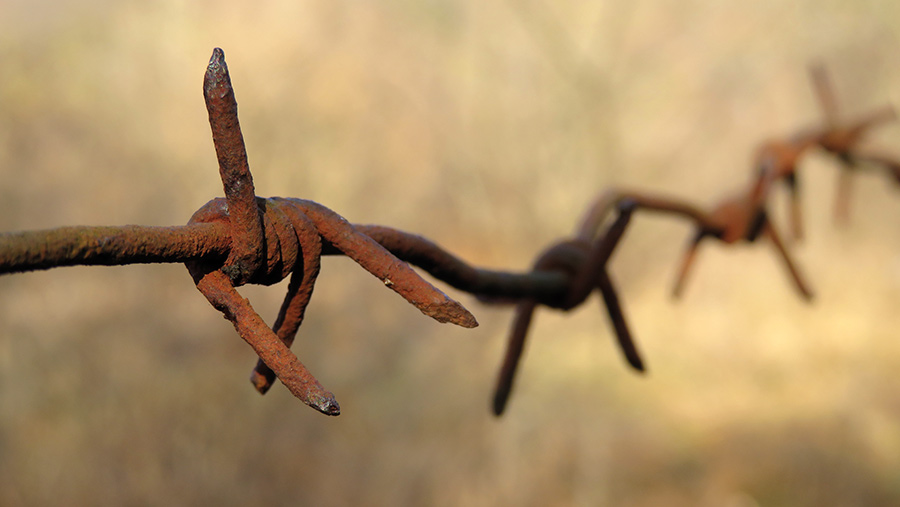 Whether you have a legal, tax, insurance, management or land issue, Farmers Weekly’s Business Clinic experts can help. Here, Ken Kaar of Thrings addresses a complex problem for a reader.

Q. I bought six acres of unregistered farmland in 1982. It’s roughly square with one corner cut out, which I do not own. This was a youth hostel.

At purchase my land had an inner line of new barbed wire fencing erected. The original YH fence that joined my land on two sides was plain wire.

The fact that my fencing is an inner line, not a boundary, is clearly proven in another corner where the 1982 fencing cuts off a dell. All maps define that corner as mine.

The hostel closed many years ago, and I did not use my land for a number of years. My blackthorn hedge at the rear of the YH plot grew extremely thick.

The YH was sold and at some stage their original plain wire was removed. I have lost a small strip of land, 30m long by up to 5m wide, with the blackthorn on it.

The corner posts are still present and the tiny scale maps show this as a straight line. But with the YH plain wire fence removed, the 1982 barbed wire has a curve on it to my neighbour’s benefit.

The land value is immaterial, but his claiming it has enabled him to go on to my land two years ago and uproot my hedge.

The owner turned the old YH into multiple occupancy housing some years ago; adding one mobile home that has an enforcement order on it.

The YH occupancy continues despite a certificate of lawfulness refusal.

In 2017 the owner built two more units that don’t meet permitted development, which I have objected to within timescales.

A month ago he added a new mobile home. All of this is with council enforcement which is grinding along very slowly.

My problem is I am left with houses in multiple occupation, noise, many vehicles coming and going and unauthorised building in an AONB.

The owner has damaged my fences, dumped spoil, made offensive comments and is impossible to negotiate with.

A. We are often asked to advise on this sort of multi-faceted situation involving planning breaches, interference with private property rights, and sometimes criminal behaviour, all by one individual.

We break the situation down into distinct issues and consider the legal position of each.

In your case we can isolate three potential issues: trespass, breaches of planning regulations, and harassment or criminal behaviour.

The potential trespass is in the form of boundary encroachment. In a boundary dispute there are often two elements which are of roughly equal importance.

First is the correct location, on the ground, of the true legal boundary which was created when one piece of land was split from another. The second is adverse possession.

A wide range of evidence can be taken into account to establish the true legal boundary.

The original deed by which the boundary was created is of course very important, but it is rarely sufficiently accurate to be conclusive. The physical features – hedges, fences, walls – are also very important.

Ordnance Survey plans and those based on OS data, like Land Registry title plans, are less useful.

Most plans, whether they are Land Registry plans or old deed plans, are for “identification purposes only”, meaning you cannot rely on the plan as showing precisely where the boundary is.

When a court is required to make a decision on where the true legal boundary lies, it may take into account all of these pieces of evidence, some of which have greater “evidential weight” than others, to establish where, on the balance of probabilities, the boundary was intended to be by the parties to the deed.

These are the rules that people tend to be familiar with – after 12 years of continuous possession, with an intention to possess and to the exclusion of all others including the true owner, the “squatter” cannot be removed.

Essentially, if your neighbour has fenced off and occupied your land exclusively for more than 12 years it is quite possible that you have lost ownership of the annexed land.

For completeness, it is worth saying that if your land was registered it would be subject to different rules, although it is not clear which would be more favourable to you.

In terms of the planning breaches, it sounds as though you are doing all you can. It is not for you to enforce planning regulations; only the local planning authority (LPA) can do that.

Sometimes there is scope for forcing the LPA to take enforcement action where it has refused to do so, although from what you say it sounds as though at the moment the LPA is working its way through what is a slow process.

Finally, you say you have had some heated encounters with your troublesome neighbour. In truth, it does not sound like his behaviour amounts to harassment in the legal sense.

Under the Protection from Harassment Act 1997 harassment is, in short, a course of conduct which causes alarm or distress.

If sufficiently serious, harassment is a criminal offence but a private person can seek an injunction in court if the police do not take action.

The courts have said that such an injunction will only be granted where there has been a criminal level of behaviour, which is rare. What you describe is much more common but probably does not amount to harassment, despite being deeply unpleasant.

These are all very complex legal issues and the foregoing has all been greatly simplified, to the extent that it cannot be relied on for what are important and long-term decisions.

You are advised to seek specialist legal advice.