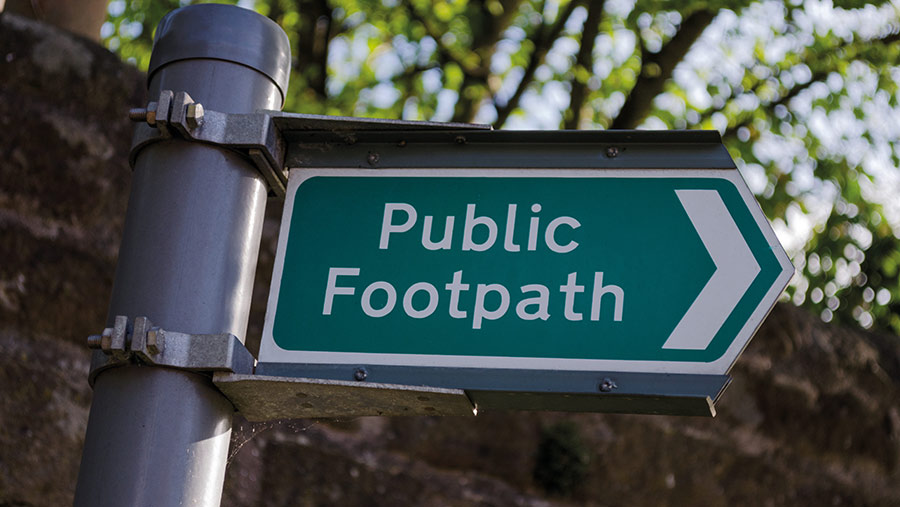 Whether you have a legal, tax, insurance, management or land issue, Farmers Weekly’s Business Clinic experts can help. Here, Richie Rees, chartered legal executive (agriculture) at Thrings, advises on the challenge of managing the increased use of public footpaths.

Q. My brother and I own a farm adjacent to a river and a country park. One field has a public footpath running through it and in recent years we have seen a huge increase in the numbers of the dog-walking public. The increased use has caused erosion damage. Signage is ignored or vandalised and personal intervention is met with aggression. Part of this area is a site of special scientific interest, which has been adversely impacted as a result of public actions. The police have been called on many occasions but are unable to do anything as they say it is a civil matter and needs to be on CCTV. We couldn’t agree more that the public should go out and enjoy the countryside, but not at the expense of someone else’s livelihood. What can we do?

A. These issues have been common in recent months, largely due to the increased use of public footpaths during the Covid-19 lockdowns.

You accept that a public footpath runs through your land. There is an established legal phrase: “Once a highway, always a highway”. This means that where a public footpath exists, it must always be available for use by the public. Providing the public are using the footpath properly, you cannot interfere.

Any abuse of the footpath, however, including straying off the official route or causing damage to your land, may allow you to pursue legal action relating to your private rights as the ultimate landowner.

As a landowner, you could apply to the court for an injunction against members of the public for trespassing. The injunction would prohibit individuals from straying beyond the footpath or using the land in any way that causes you loss and damage.

In practice, it is difficult to obtain an injunction against unknown members of the public. It is also an expensive option that would still need to be enforced against anybody who goes on to breach the injunction.

Looking at the options, you could apply to your local authority for the closure, or “extinguishment”, of the footpath. In short, this will only be achieved if it is clear that the public have no use for the route any longer. It appears the footpath does have a genuine use, given its popularity and the nearby country park, so I do not see this option succeeding.

Instead, an application to “divert” the footpath might be preferable. This will typically retain the start and end points, but change the route of the footpath. The local authority will balance your interests as the landowner with the convenience of the public, who are being asked to use the new, diverted route.

Alternatively, the erosion might give the local authority reason to improve the quality of the existing footpath so it can withstand proper use by the public. In the majority of circumstances, public rights of way are maintainable at public expense.

One practical solution may be to create a physical boundary along each side of the footpath. A fence or hedge could prevent any straying from the footpath, whether accidental or intentional. However, these changes must not interfere with the public right of way, to include its width and aspects such as the view from the footpath.

It may be advisable to engage the local authority informally and explore improvements in the quality and security of the existing footpath. Potential new routes could also be proposed, to see if a diversion application is likely to succeed before you take any formal steps down that path.