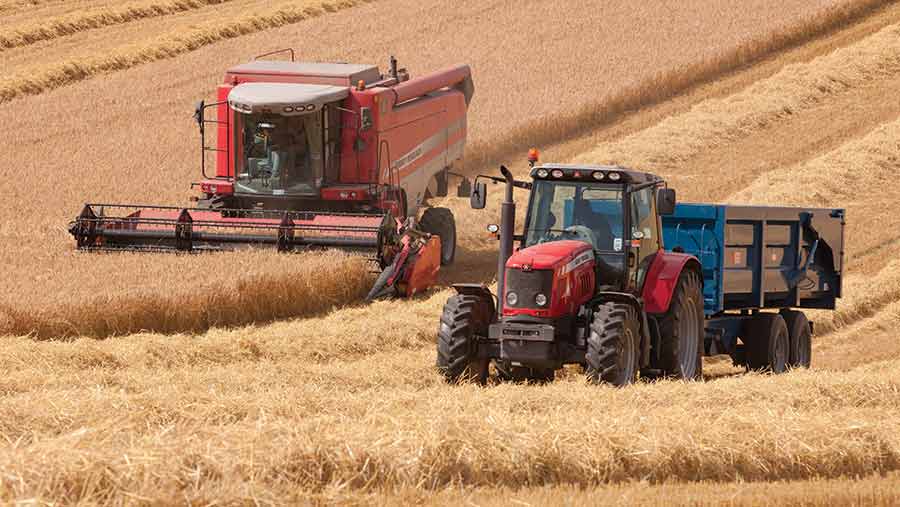 Returns from contract farming agreements (CFAs) rose for harvest 2018, despite lower yields, according to Strutt & Parker.

Higher commodity prices and a favourable exchange rate for BPS payments combined to produce an average surplus of £212/ha to be shared between farmer and contractor – the highest for four years.

Provisional results from the firm’s annual survey of CFAs, covering 19,400ha mainly in the east of England, East Midlands and south-east England, show total returns to the farmer averaged £375/ha in 2018 (£361/ha in 2017).

Richard Means, director in the firm’s farming department, said this was comparable to the rent farmers would receive for a three- to five-year farm business tenancy, but that a CFA meant they retained control of farming practices and the tax advantages of being a trading business.

How does a CFA work?

A contract farming agreement is a joint venture between a landowner or tenant (referred to as the farmer) and another farm business (known as the contractor), where the farmer provides the land and buildings and engages the contractor to provide the services to grow the crop.

The contractor provides labour, machinery, management expertise and can provide additional buildings if needed. Any crops grown are the property of the farmer.

A separate bank account, usually on overdraft, funds the variable inputs. The crops are sold and after the two first charges and variable costs are accounted for, any surplus is shared between the two parties on a pre-agreed split.

Tenders for agreements due to start after the 2019 harvest were typically from £250-£320/ha, but highly dependent on exactly what roles are covered by the contractor’s basic remuneration, said Mr Means.

He warned that any new or renegotiated agreements needed to have an eye on the timing of the new agriculture policy and the introduction of the Environmental Land Management system (ELMs).

“For example, for some agreements we’re adding clauses allowing both parties to review the terms, should there be fundamental changes to support payments. Also, if signing up to longer-term deals, we’re going for a three-year review, as we’re not expecting significant changes before harvest 2021, but by then should know the details that make it easier to formulate new agreements at that point.”

Strategic reviews by contractors had led in some cases to them giving up agreements that were not working.

“One trend that has emerged is that CFAs with mid- and higher-tier CSS in place are now much more acceptable, from both sides, because it can enhance returns to both parties if they are well structured,” said Mr Means.

Traditionally, environmental stewardship had been seen by some contractors as an issue, said Mr Means, as they shrank the farmed area and therefore reduced earning potential.

However, that mindset is changing, as from the farmer’s point of view, they can take out more marginal land and put it into Countryside Stewardship, achieving a good return, with fewer overheads. This can also help contractors by improving their efficiency and letting them work the better land. CFAs likely to grow in popularity

Mr Means said he was expecting CFAs to increase in popularity over the next few years as farmers adjusted their business structures to adapt to lower levels of direct subsidy, cutting overheads and helping to manage volatility.

Mr Means said contracting farmers were still keen to take on more land, but were being strategic about choosing which farms to tender for in terms of their proximity to their own units and whether they had good grain storage facilities.