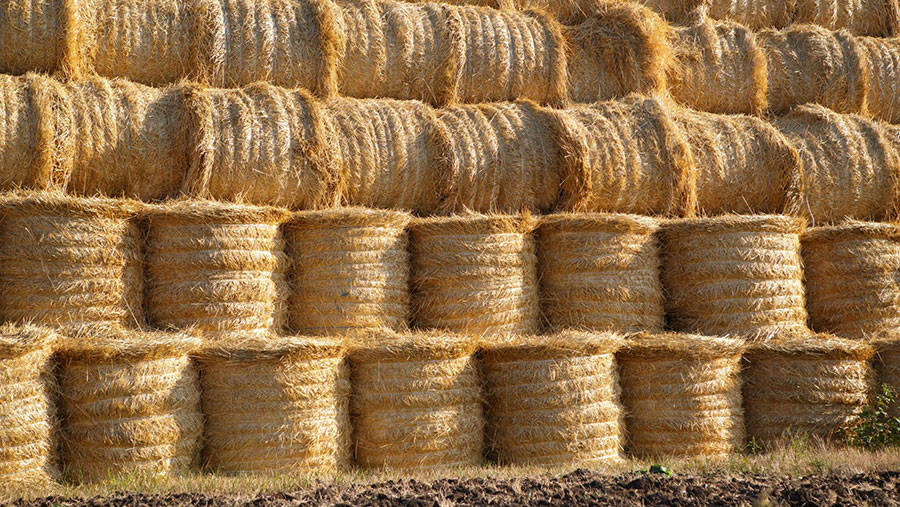 Farmers have been advised to check their haystacks insurance cover is correct to avoid a financial hit.

The insurance policy’s conditions all need to be met for farmers to receive a payment in the event of damage or loss. These criteria often include limits on both stack proximity and height.

With on-farm stacks at their largest after harvest, the autumn is a crucial time to check that the insurance stipulations are all being met.

High hay and straw prices could also mean stacks are potentially underinsured. Insurance typically costs about £150/year for £25,000 of cover, but this differs between insurers.

Rupert Wailes-Fairbairn, divisional director at rural insurance broker Lycetts, warned that if stack limits are contravened, such as being too close together or too high, or are undervalued, farmers could face significant shortfalls in the event of loss, such as through accidental fire or arson.

Mr Wailes-Fairbairn said: “With the value of hay and straw continuing to be unpredictable due to variable weather conditions, causing the pendulum to swing between shortages and surpluses, farmers could be faced with forking out considerable sums to replace feed, further compounding the financial impact of the loss.”

Limits on volumes and values of stacks vary between different insurers. Typically, an individual stack would be insured up to about £20,000 in value, but this can be extended up to about £50,000 if agreed with the brokers.

Another issue is underinsurance, where farmers are left out of pocket when hay and straw prices are higher than the insurance amount. This can leave farm businesses spending more on replacements than is paid out from insurance companies for the losses.

Mr Wailes-Fairbairn said: “There is quite a lot of volatility in commodity values, influenced by many factors, not least the trying economic situation prompted by global market uncertainties.

“We saw hay and straw prices peak earlier this year due to an unfavourable 2020 harvest, but this has seen a gradual downturn in recent months.

“With prices varying so much, it is important that farmers take stock and determine the value of each year’s yield, to ensure that they are sufficiently covered in the event of a claim.”

Mr Wailes-Fairbairn recommended three time periods when farmers need to revisit insurance cover: at renewal; after harvest, when the volume is apparent; and in special trading circumstances that lead to material changes in value.

Some commercial policies may have a special condition of averages that considers periods where there might be greater quantities of stock at certain times of year.

“We have seen an example of straw being stored in a shed that was set alight and both the straw and shed were underinsured. As a result, the insurer applied average, which cost the farmer more than £70,000,” he said.