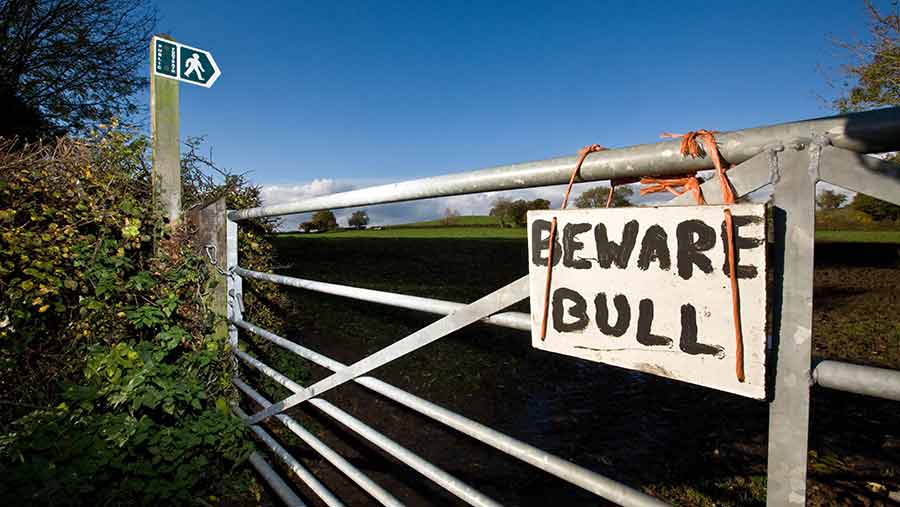 Cattle farmers are being urged to make sure their public liability insurance is up to date in case a walker gets injured while crossing their land.

In recent years there have been frequent reports in the spring and summer of people being attacked and trampled by cattle while out walking.

On average, four to five workers and members of the public are killed in accidents involving cattle each year.

With Easter approaching and cattle and calves increasingly out in fields, there is concern that cows could become aggressive if they feel threatened.

Matthew Peters of Bruton Knowles said farmers should double-check their insurance policies and make sure signs are in place, especially on public footpaths, warning the public of dangers.

“Farmers are becoming increasingly concerned about walkers and members of the public, who should be very wary when crossing a field that is occupied by cows and calves,” he said.

“If a public footpath does cross a farmer’s land, placing clear signs is a good way to inform the public of the dangers and will help mitigate any potential issues. Those walking dogs should also be told to keep them on a lead and under control.”

HSE advice is that, if possible, farmers should use fields or areas not used by the public when cattle are calving or have calves at foot, especially during periods of greater public use such as public or school holidays.

It also suggests considering whether it is reasonably practicable to temporarily fence alongside a public right of way so that the cattle and people are kept separate.

The warning about the risks comes as a farmer from Wiltshire prepares to face a Crown Court trial over the death of a walker who was trampled by cattle in 2013.

This legislation covers the need to protect people “other than those at work” from risks to their health and safety arising out of the activities of people at work.

Mr Godwin attended a magistrate’s court hearing on 7 March where he pleaded not guilty to the charge. A preliminary hearing has been scheduled for 8 April at Swindon Crown Court.

In Scotland, where the public have a right of access across the countryside, people are being urged to remember the Scottish Outdoor Access Code, which stipulates that walkers with dogs should not access fields where there are young lambs or calves.

NFU Scotland president Allan Bowie said: “In particular, dogs should always be kept well away from sheep and cattle because even if no lambs or calves are visible, they could be present but well hidden by the herd or flock. Cattle in particular can react aggressively, and their natural instinct to protect their young is strong at this time of year.”