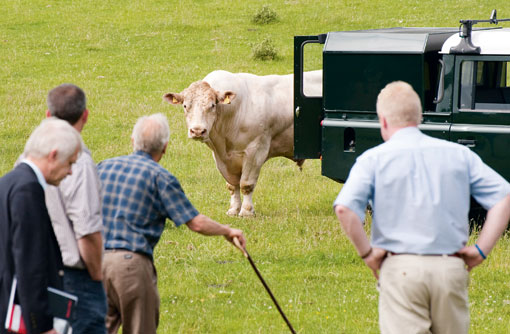 Over the past 10 years, an average of one person a week has been killed by an on-farm accident – and that includes the deaths of 81 people working with livestock.

Six workers have died during the past year when dealing with farm animals – three trampled to death by cattle and three after being attacked by bulls.

While two of the victims over the past 12 months were members of the public, three were farmers and one was a self-employed welder who had offered to help a farmer move a bull from its pen.

And behind the formal statistics there is a vast number of unreported “near misses” as well as many instances where farmers and their staff have narrowly avoided non-fatal accidents directly associated with livestock – and not just cattle.

The Health and Safety Executive says non-fatal farm injury data is grossly under-reported. It’s estimated that only 25% of injuries to employees are recorded and only 5% for the self-employed.

Delving into the mass of data compiled by the HSE covering fatal incidents over the past two years on livestock farms reveals a great number of injuries caused by cattle that have knocked over farmers who have later died from the head injuries they sustained.

These incidents, says the HSE, highlight the use of unsafe handling facilities or a poorly planned system of work procedure.

“Familiarity with individual cattle can lead to complacency, especially when handling bulls. A number of accidents, some fatal, happen every year because of a failure to treat bulls with respect. Remember, a playful bull can kill you just as easily as an angry one.”
HSE

Handling cattle is undoubtedly the most high-risk livestock job when it comes to accident rating. Although individuals – both farmers and members of the public – have been killed by cattle in fields, it’s cattle in confined spaces being moved or handled that present the greatest risk.

Animals perceived to be quiet or to have shown no previous signs of being dangerous, all too often lead to those who are dealing with them to adopt a relaxed approach to personal safety. The HSE says dealing with cattle always involves a risk of injury from crushing, kicking, butting or goring.

The executive urges farmers never to never underestimate risks, even when good precautions are in place.

“Familiarity with individual cattle can lead to complacency, especially when handling bulls. A number of accidents, some fatal, happen every year because of a failure to treat bulls with respect. Remember, a playful bull can kill you just as easily as an angry one,” says the HSE.

HSE statistics also highlight several bull attacks to farm staff and a number of unwitnessed deaths of farmers in fields where cattle were present.


Deaths to members of the public almost exclusively involve walkers on footpaths through fields where cows and calves or maiden heifers are grazing – and often when the victim was accompanied by a dog.

And while cattle present the highest personal risk, dealing with the inherent unpredictability of any livestock when being handled or moved can lead to personal injury caused by falls on slippery surfaces, being barged or even underestimating the potential danger of rams in confined spaces.

The HSE believes that injuries and deaths resulting from farm livestock are attributable to any of a host of underlying reasons.

While the unpredictability of livestock is a key issue in all accidents, the situation that actually gives rise to the accident is more than likely to have been accentuated by an assumption that health and safety issues are nothing more than “red tape”.

This year Livestock 2012, incorporating the Dairy Event, will be running a Farm Health and Safety Demonstration area. Sponsored by John Deere, the practical demonstrations, running consecutively over both event days, will feature four scenarios that represent the main causes of fatality on-farm today. The scenarios will demonstrate the risks associated with poor health and safety practices and highlight the causes and consequences of accidents as well as demonstrating the correct safe approach. Find out more about the event, which takes place on 4 and 5 September at the NEC, Birmingham, at www.fwi.co.uk/livestock2012