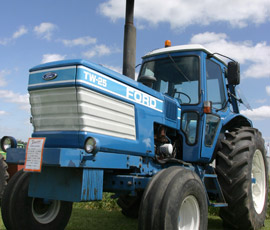 EU tractor rules for the levels of vibrations going through a driver’s body could seriously restrict the time farmers can spend in their tractors.

Health and safety measures for whole-body vibration (WBV) limits introduced in 2005 are set to become mandatory next year for farm machinery built before 2007.

The Control of Vibration at Work Regulations was passed in July 2005 with the aim of protecting workers from risks to health from vibrations.

Businesses were given nine years to conform to the legislation, which is due to come into effect in agriculture next July.

The regulations, based on a European Union directive to protect workers from risks to their health and safety from vibration, introduce action and limit values for hand-arm and whole-body vibration.

Critics have warned that this could restrict the time that farmers can spend in their tractors to less than one hour a day.

A spokesman for the Health and Safety Executive (HSE) said: “Whole-body vibration can have debilitating and often life-changing health implications, particularly through back pain.

“It was recognised that agriculture and forestry industries have unique challenges, which is why they had an additional nine years’ transition to comply with the regulations.”

However Scottish Liberal Democrat MEP George Lyon today said there was an “overwhelming case” for farmers in Scotland to be exempt from EU WBV rules.

Mr Lyon said: “Clearly we need to doing what we can to help keep farmers safe in the fields but the facts of the matter are stark.

“If these rules are implemented and enforced without flexibility for farmers we could end up with a situation where some people will not be able to plough their fields. This would be an utterly ludicrous state of affairs.”
George Lyon, Scottish Liberal Democrat MEP

“If these rules are implemented and enforced without flexibility for farmers we could end up with a situation where some people will not be able to plough their fields. This would be an utterly ludicrous state of affairs.”

He added: “Health and safety is important, but with tractor technology having improved significantly in recent years there is an overwhelming case for the exemption that the agricultural sector has from these rules to be extended.”

Ben Ellis, NFU regulatory affairs adviser, said: “By following guidance issued by the HSE on whole-body vibrations, farmers should be able to comply with the regulations.

“It is mostly equipment built before 2007 that will not meet vibration guideline levels. It is less of a problem in newer equipment due to improved suspension models for the cab.

“Farming has different activities at different times of the year. Each business is different and each activity will have a different level of vibration associated with it.

“Applying the HSE guidelines, limiting time and job rotation including breaks, as well as buying new kit are steps farmers could take to help limit exposure to whole-body vibration.”

Read Farmers Weekly‘s Academy on workplace transport, including practical tips on how to reduce whole-body vibration