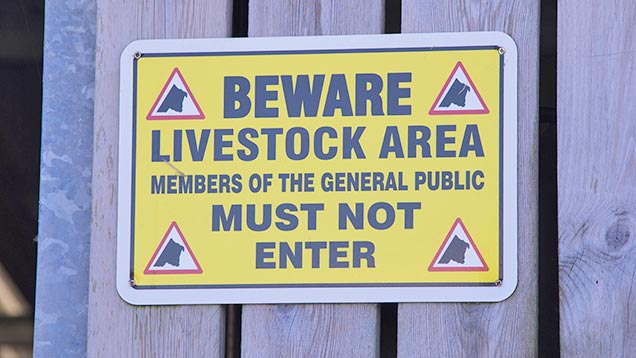 Farming remains the most dangerous industry in the UK with the highest rate of fatal injuries.

The figures showed 33 workers were killed on farms in England, Scotland and Wales between April 2014 and March 2015.

See also: Farmer speaks out over horror at son’s death

Of the 33 workers killed on farms, 14 were employees and 19 were self-employed.

In addition, four members of the public also died in accidents on farms in 2014-15.

The rate of fatal injuries – 9.12 per 100,000 workers – remains higher than any other industry, including construction.

Overall, agriculture accounted for 23% of all workplace deaths in England, Scotland and Wales in 2014-15.

Only the construction industry, with 35 deaths, recorded a higher total of fatal injuries.

However, the fatality rate in farming is close to eight times higher than the construction industry, which recorded a rate of 1.62 per 100,000 workers.

Over the past five years, the average number of people killed in agriculture is 33 – the same figure as this year.

The HSE figures were released ahead of the annual Farm Safety Week, which begins on Monday (6 July).

Stephanie Berkeley, farm safety campaign specialist at the charitable Farm Safety Foundation, home of the Yellow Wellies campaign, said they showed the death rate in agriculture remained “stubbornly high” and served as a reminder to everyone of the dangers of working in the industry.

“It’s so disappointing, it really is,” said Ms Berkeley, commenting on the figures.

“It shows the importance of the Farm Safety Week and educating the industry, including young farmers, about the dangers.

“Our message for this year’s campaign is: ‘don’t learn safety by accident’.

“Take five seconds, assess what you are doing – even if you have done something thousands of times.

“Make sure you understand the issues surrounding slurry. Is the pto shaft guarded properly?”

On each day of Farm Safety Week, farmers will be encouraged to take ﬁve minutes to assess the safety of some routine tasks.

The week will include testimony from 18 farmers and farmworkers highlighting dangers at work.

“We are using stories of 18 people who all consider themselves lucky to be alive and have a variety of paralysis and/or amputations,” added Ms Berkeley.

“It’s not just the effects on them, but also their families.”

NFU vice-president and Farm Safety Partnership chairman Guy Smith said: “From the statistics, farming has the poorest record of any occupation in the UK. We need to take responsibility and wake up to the risks around us and do something about making our workplace safer.”