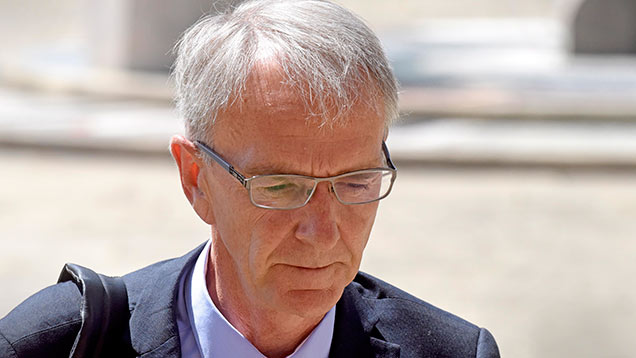 A farm manager who ordered two young men working on a Tory peer’s country estate to hand-pick apples from a “highly dangerous” container so he could win a prestigious fruit show has been convicted of their manslaughter.

Andrew Stocker, 57, enjoyed the “kudos” of winning a national fruit competition and needed the very best apples from the 1,012ha property owned by the Earl of Selborne, John Palmer.

He instructed Scott Cain, 23, and Ashley Clarke, 24, to enter the cooler – which had an atmosphere of just 1% oxygen – and select apples holding their breath without breathing apparatus.

Mr Stocker instructed them to do so because he needed to enter the best apples to give himself a chance of winning the annual Marden Fruit Show in West Malling, Kent.

But the pair were discovered unconscious in the apple store after using the “highly risky” procedure known as “scuba diving” among workers at the Blackmoor Estate near Liss, Hampshire.

Mr Stocker was convicted of manslaughter even though he was 5,600 miles away at the time of the men’s deaths, holidaying in the Maldives.

Winchester Crown Court heard he took a “blasé” approach to his workers’ safety and took pride in his success at the prestigious competition, where he had won awards previously.

The contest claims to showcase the best in British fruit and the senior manager told workers to enter the nitrogen-cooled container with an atmosphere way below the 21% oxygen needed for humans to breathe normally.

The approved and safe method of using a metal hook to retrieve the apples was not deemed “adequate enough” to senior manager Mr Stocker, because he needed perfect size and shaped apples, the court heard.

This was because the fruit had to be a particular size for the competition but the procedure brought about the deaths of father-of-one Mr Cain and amateur rugby player Mr Clarke.

On Friday (19 June), Mr Stocker, of Bordon, Hampshire, was convicted by a majority of 11-1 after 18 hours of juror deliberations of two charges of manslaughter through gross negligence.

Judge Robert Akenhead told him he could face jail.

Mr Justice Akenhead said: “I think it is important the apple storage and fruit storage industry is made aware of this case.

“I have noticed members of the family have been in the public gallery and I know some of them are here today – I offer my sincere condolences to them all.

“Mr Stocker, I must leave all options open and that could well mean imprisonment.”

Blackmoor Estate had already admitted health and safety breaches in January 2015 and will be sentenced with Mr Stocker on 1 July.

Mr Cain and Mr Clarke were discovered unconscious in the container by frantic colleagues who tried in vain to save them, but they were ultimately pronounced dead at the scene on February 18, 2013.

Mark Dennis QC, prosecuting, described the deaths of the two men as “an accident waiting to happen”.

On that day, Mr Clarke was standing on the roof of the container as his “buddy” to keep watch and shout if Mr Cain struggled.

Lord Selborne, 75, is a member of the Conservative party and entered the House of Lords in 1992, becoming a hereditary peer in 1999.

Blackmoor Estate has been growing and storing fruit since the 1920s and has a reputation for high-quality storage and service, winning numerous awards for long term storage of Cox, Bramley and Gala apples.

The farm claims to sell one of the widest selections of fruit available anywhere in the country with more than 75 varieties of apple trees, pears, cherries, plums and other fruit.

In 2012, The Ron Tassell Trophy at the Marden Fruit Show competition for the store operator with the best all-round exhibit was won by Mr Stocker himself, representing Blackmoor Estates.

The Marden Fruit Show, also known as the National Fruit Show, has been taking place for more than 80 years and is a key event for the industry.

Shortly before 3pm their whereabouts became a matter of concern as they had not been seen for two hours.

Mr Dennis said: “The moment the person’s air ran out and they tried to draw a breath would result in them collapsing and they would succumb to the effect of oxygen deprivation.

“The fatal result would have been inevitable in such cramped and dangerous circumstances.”

Mr Stocker, despite being abroad in the Maldives, was the senior manager and was “well aware” of the dangers, the jury of 11 men and one woman were told.

Mr Dennis added: “He was responsible and was very experienced in this field of work and spent many years in charge of the packhouse.

“He was undoubtedly well aware of the dangers of the units when used with a controlled atmosphere.

“He took a blasé approach and he encouraged bad practice as workers would enter the containers without breathing equipment – this was a process known as ‘scuba diving’.”

Mr Stocker started working at the Blackmoor Estate in 1991 and was promoted to operations manager in 2004.

During the nine-day trial Mr Stocker said he thought “scuba diving” was safe and said the method had been in place since before he became the manager.

He said: “I believed it was a safe method of recovering the fruit. I had never considered using breathing apparatus.”

Mr Cain, from Liphook, Hampshire, was engaged to marry his long-term girlfriend Filipa Turner and had a young daughter called Isla.

Mr Clarke, from Liss, Hampshire, was also engaged to be married to his girlfriend, Rachel.

Speaking after the verdict, Ashley’s father, Ian Clarke, 58, said ordering someone to enter a dangerous atmosphere to win a fruit competition was “beyond belief”.

He said: “We are pleased with the guilty verdict and, regardless of the sentence imposed, the outcome means somebody is held to account for the deaths of both Ashley and Scott.

“Mr Stocker’s actions have been proven to be grossly negligent and not simply a result of poor judgment which provides us with a positive end to an emotionally draining trial.

“We would never have accepted Mr Stocker’s defence that collecting apples from controlled atmosphere units with virtually no oxygen in them by simply holding one’s breath while ducking down was a safe and acceptable practice.

“Clearly the breath-holding method was too dangerous to be used regularly, which Mr Stocker was aware of but continued to employ with such tragic and life-changing consequences for my family.”