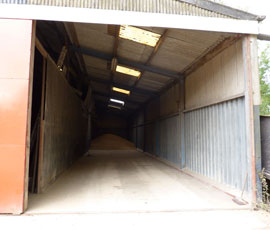 A farm owner was fined nearly £10,000 for a breach of safety law after a young farmer suffered serious injuries in a fall.

He had been on the roof trying to repair a leak between two adjoining farm buildings when he tripped and smashed through one of six rooflights, landing on the concrete floor.

Mr Hoggard spent a week in hospital and was off work for six weeks following the incident on 19 July last year. He is still receiving physiotherapy nearly a year later.

Farm owner David Adamson pleaded guilty at Beverley Magistrates’ Court to failing to take the proper safeguards or protective controls in place to protect someone working at height.

Magistrates heard Mr Adamson had hired Mr Hoggard to help out over the busy summer harvest period and to assist with building repairs and general farm work.

Both men had together made one attempt over several hours to fix the leak on the roof, which sloped from 4.1m to nearly 5m and had six roof lights along its 27m length.

“Falls from height kill more workers than anything else and is one of the most common causes of death in agriculture, yet Mr Adamson did not put any safety measures in place to protect Daniel as he worked over four metres from the ground.”
Paul Eastell

After that failed, Mr Adamson asked Mr Hoggard to fit lead flashing where the leaks remained. But while he was doing this he tripped, lost his balance and plunged through the roof light on to the concrete below.

After the hearing, HSE Inspector Paul Eastell, who investigated the incident, said: “Daniel Boldan Hoggard is, frankly, lucky to be alive.

“Falls from height kill more workers than anything else and is one of the most common causes of death in agriculture, yet Mr Adamson did not put any safety measures in place to protect Daniel as he worked over four metres from the ground.

“Working at height, and even more so near fragile surfaces, is very high risk and yet HSE Inspectors continue to find dangerous practice and a disregard for common sense and inexpensive safety controls. In this case there should at least have been suitable platforms, guard rails and boarding over the roof lights.

“I’m pleased that Daniel has made a reasonable recovery from his injuries and I hope this case emphasises to the wider farming community the need to think carefully through the dangers involved in all work activities and then act to reduce those risks to their workers and themselves.”

Join the forum discussion on health and safety.