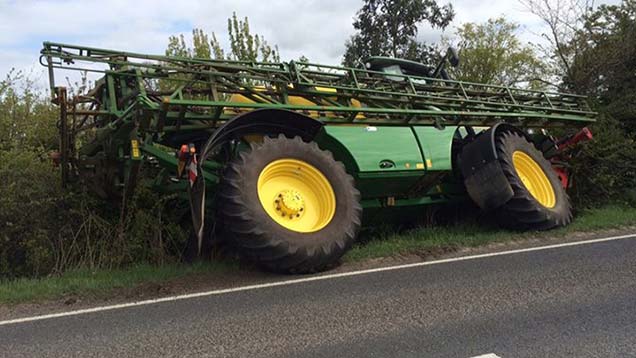 A farmer escaped serious injury after the farm sprayer he was driving slewed off the road and tumbled into a ditch.

The crash caused some 40 litres of agrochemicals to spill from the John Deere sprayer.

Firefighters from Cambridgeshire Fire and Rescue wearing breathing apparatus used putty and pads from an environmental pack to stem the leak and make the area safe.

Fire crews from Ramsey, Chatteris and St Neots and a hazardous material unit were called to the incident at Forty Foot Bank, Ramsey, at 8.15am on Saturday (2 May).

The driver was out of the cab when firefighters arrived at the scene and being cared for by paramedics.

A fire service spokesman said: “The total spillage was confirmed at 40 litres of diluted weedkiller, which was then further diluted with water from the fire engine and allowed to drain into the earth in agreement with the Environment Agency.

“The B1096 road was closed and a cordon was put in place while the incident was dealt with. Crews returned to their stations by 12.40pm.”