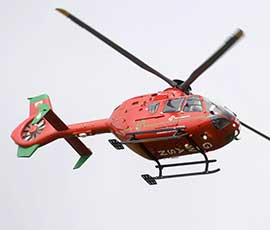 A Ceredigion farmer who suffered serious injuries after being attacked by a stag has died in hospital.

Kenneth Price, an experienced sheep farmer who diversified into venison, suffered serious, multiple injuries after being gored by the deer’s antlers.

The 75-year-old was attacked during the middle of the rutting season for deer at Mountain Hall farm in Saron, near Llandysul.

Air ambulance paramedics carried out surgery on Mr Price at the scene of the incident last Wednesday (30 October).

He was airlifted to Morriston Hospital in Swansea in a critical condition where doctors were treating him in intensive care.

But five days after the attack, he died in hospital from his injuries.

“He had a flock of Border Leicesters, but this was a new venture with the deer.

“He had started farming deer. It’s the rutting season with the stags. It’s a real shame.”

A local coroner will formally open an investigation into Mr Price’s death later this week.

The Health and Safety Executive (HSE) said it was aware of the death and had started initial inquiries.

Read more news and features on farm health and safety

Farming still the most dangerous industry