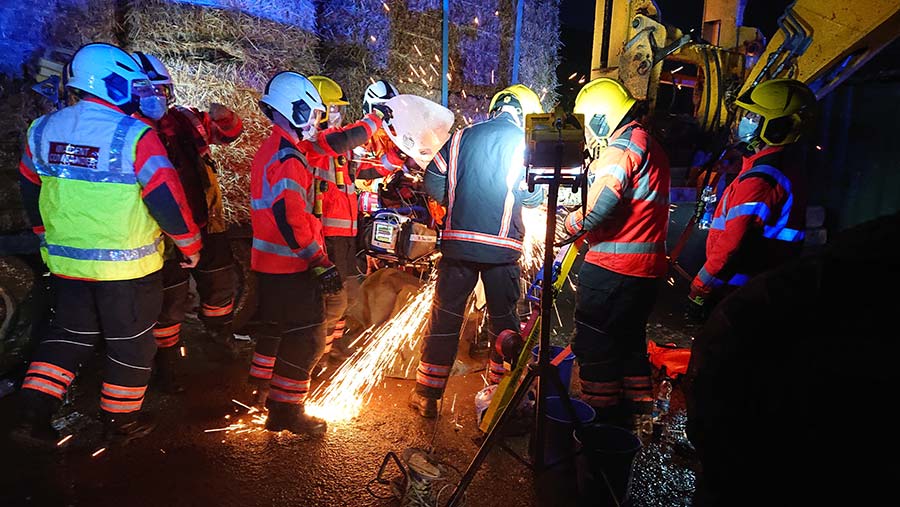 Johnathan Willis being cut free from the telehandler © EAAA

A dairy farmer who dodged death by millimetres when he was impaled on a telehandler tine has helped raised £45,000 for the air ambulance team that played a crucial role in saving his life.

Jonathan Willis was untying straps on a trailer of bales at his farm near Wisbech, Cambridgeshire, when the accident happened in October last year.

Mr Willis’ wife, Wendy, raised the alarm and when emergency services arrived, the East Anglian Air Ambulance (EAAA) worked with police, ambulance, fire and rescue teams to cut the tine with an angle grinder and free the trapped farmer.

Mrs Willis said: “We know that without the enhanced skills of the air ambulance team that day Jonathan wouldn’t have made it to hospital.

“They took control of the situation – which was like living my worst nightmare – and made all the right decisions which got him to the right hospital and to the right surgeon with a fighting chance.”

The tine was mere millimeters from causing life-threatening internal bleeding and damaging vital organs, so keeping Mr Willis, who was conscious throughout, still was crucial.

The length, weight and position of the tine, which was still in place, meant the farmer could not be safely transferred in the helicopter.

He arrived at Addenbrooke’s Hospital by ambulance just before 7pm, over two hours after the accident.

EAAA consultant Dr Nathan Howes said: “Fortunately, the careful release and Jonathan’s vital signs meant that we could take him directly to my colleagues at Cambridge Major Trauma Centre.

“I’ll never forget the sense of humour he maintained until we reached the operating theatre. It felt like treating a friend.” 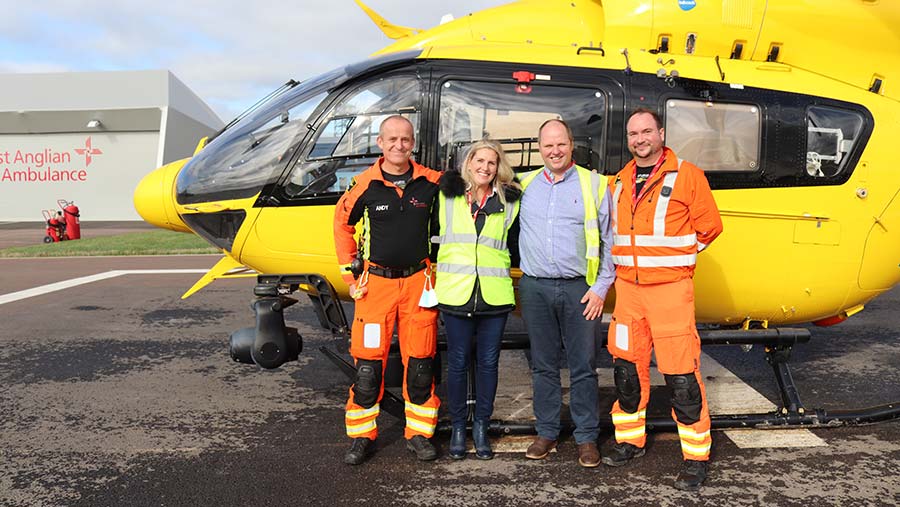 Mr Huguet praised the professionalism of his colleagues.

“Mr Willis’ incredible recovery is down to his amazing composure and courage throughout this ordeal and the amazing team work I witnessed that night at Addenbrooke’s.

“Many people from different professions in the emergency services – in and out of the hospital – drew on years of experience and know-how to get Mr Willis safely recovered.”

The Willis family said they wanted to raise money for the EAAA at a charity ball, held a year on from the accident, as well as raise awareness about farm safety.

“What happened to me was just such an unusual accident and I’m just so, so thankful that there were so many expert teams available to help me get through it,” said Mr Willis.

“Otherwise, I’m sure the outcome could have been very different. I will be eternally grateful to everyone involved in saving my life.”