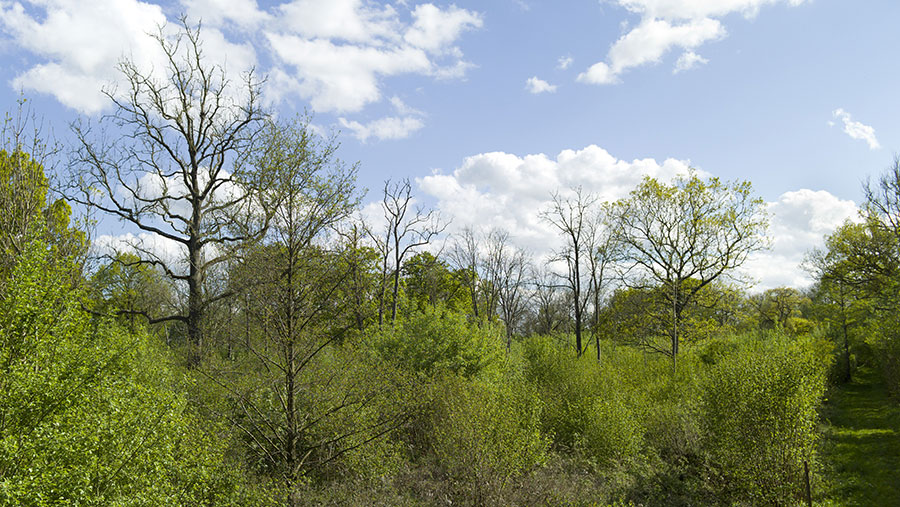 Farmers risk prosecution under health and safety legislation as a consequence of failing to deal with dangerous trees on their land, including those affected by ash dieback.

Pressure on farm budgets means that farmers may not be felling trees weakened by chalara ash dieback, says Mark Townsend, head of woodland management and arboriculture at Savills.

Some landowners are ignoring the problem but are “very much rolling the dice’’, he suggests.

See also: How to manage tree safety on farms to reduce risk and cost

“There are farmers who are saying they are not going to look at dealing with the ash yet because it is too big a job – they are burying their head in the sand.’’

Not every diseased tree needs to be clear felled, but Mr Townsend advises that it is imperative to keep a record to show trees are being monitored and that there is a plan to regularly check them.

This was reflected in the outcome of two recent court cases resulting from people being injured by falling branches.

“On one of the estates there was a process in place for monitoring the trees and they were found not to be negligent, but in the other case, where there was no process of inspection, they were found to be liable,’’ says Mr Townsend.

An inspection does not always need to be formal and carried out by an external operator, it can be done by someone who understands the land – the farmers themselves, he adds.

“Something as simple as a diary note on the condition of the tree can help, perhaps noting that it doesn’t look significantly worse than it did last year if that is the case, and referencing the date and time or keeping a photographic record.

If a farmer is prosecuted for negligence as a result of an accident involving a diseased tree, it could be under the Health and Safety at Work Act 1974.

This prosecution, warns Mr Townsend, can have serious repercussions for their business if they are found guilty.

According to the Woodland Trust, ash dieback is expected to kill up to 95% of ash trees across the UK.

Delaying dealing with diseased trees will only escalate the eventual cost and reduce the potential income from felled wood.

As the disease progresses, it will compromise the structural integrity of the tree, says Mr Townsend.

This will not only increase the chance that the tree will fall over, but also the risk to the contractor removing it – adding significant cost to the felling operation.

Any revenue from the timber will be reduced because the wood will have degraded.

Mr Townsend says the South East is the most wooded part of England and ash makes up a big proportion of that, but the problem of dieback is UK-wide as the disease is now widespread.

The costs associated with managing ash can be significant, but there are grants available to support this work, he adds, including the Routes to Market for Ash Timber Innovation Fund and the Woodland Tree Health grant.