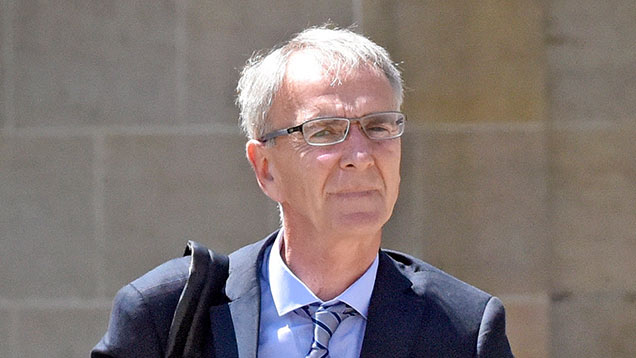 A fruit farm manager has been jailed for two-and-a-half years for the manslaughter of two men.

Andrew Stocker, 57, of The Links, Whitehill, Bordon, Hampshire, was manager of the pack house facility on the Blackmoor Estate, in Liss, in February 2013.

A few days before he went on holiday to The Maldives, he left instructions to two workers to hand-pick apples from a “highly dangerous” storage facility.

Scott Cain, 23, and Ashley Clarke, 24, were told to hold their breath and enter the cooler, which had an atmosphere of just 1% oxygen.

They were told to do so because Mr Stocker enjoyed the “kudos” of winning a national fruit competition and needed the very best apples from the 1,000ha (2,500 acres) property owned by the Earl of Selborne, John Palmer.

On 18 February, 2013, both Mr Cain and Mr Clarke entered the cooler without wearing any breathing apparatus because Mr Stocker needed to enter the best specimens to give himself a chance of winning the annual Marden Fruit Show in West Malling, Kent.

Mr Stocker was convicted of manslaughter even though he was 5,600 miles away at the time of the men’s deaths, having just arrived in the Maldives.

He had denied manslaughter, but admitted exposing the men to a risk of death.

Blackmoor Estate was fined £75,000 and ordered to pay prosecution costs of £30,000 after admitting three counts of contravening health and safety regulations, contrary to the Health and Safety at Work Act 1974, on 9 January this year.

Sentencing Mr Stocker, the judge said he hoped the legacy of the tragic case would mean no further lives will be lost in such a way.

“These deaths were caused by gross negligence manslaughter,” said the judge.

“Mr Stocker, you adopted a practice whereby no more than once a year you entered, through a roof hatch, a controlled atmosphere unit.

“You authorised others to take part in the practice and I have no doubt they did it because you yourself did it.

“Although you were away on holiday you left instructions that Scott should collect fruit show samples and he recruited Ashley who had no previous experience of the practice.”

Earlier, the court heard how Mr Stocker took a “blasé” approach to his workers’ safety and took pride in his success at the prestigious competition, where he had won awards previously.

The approved method of using a metal hook to retrieve apples was not deemed “adequate enough” to senior manager Stocker, because he needed perfect-sized and shaped apples, the court was told.

This was because the fruit had to be a particular size for the competition, but the procedure brought about the deaths of father-of-one Mr Cain and amateur rugby player Mr Clarke.

Richard Matthews QC, mitigating for Stocker, said he represented no danger in the future.

He said: “My Lord should be in no doubt that Mr Stocker is deeply troubled and deeply affected by what he did and what he caused.”

Mr Cain, from Liphook, Hampshire, was engaged to marry his long-term girlfriend Filipa Turner and had a young daughter called Isla.

Mr Clarke, from Liss, Hampshire, was also engaged to be married to his girlfriend, Rachel.

In a victim impact statement, Mr Cain’s fiancee  said his death had a “profound effect” on them.

His mother Sherilyn and father Peter echoed this in their statements, saying they were “completely devastated” and his death had a “lasting effect” on the whole family.

Speaking after sentencing, Det Sgt Rich Sellwood, of Hampshire Constabulary, said: “This case has been a tragedy for everyone involved.

“Whilst it is unlikely anyone will take any pleasure from seeing a man like Andrew Stocker sent to prison, he has been found to be responsible for encouraging and supervising the appallingly dangerous practice that directly led to the deaths of two young men.

“I hope that the families of Scott and Ashley will take some solace from the fact that someone has been held to account for these totally avoidable deaths.”