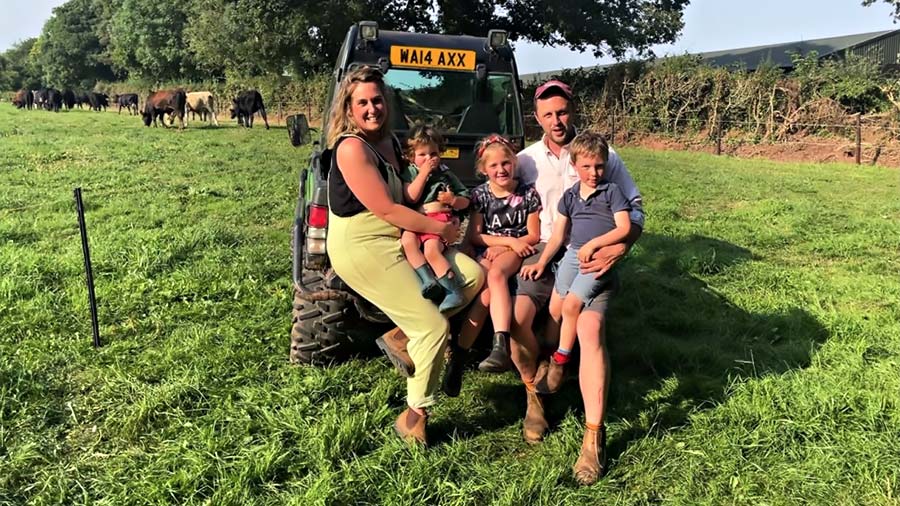 A farming couple have called on the government to enforce regular first aid training for farmworkers after their young son was resuscitated in a life-threatening incident.

Alex and Kendle Wotton are new entrants to farming and run a calf-rearing enterprise near Tiverton in mid-Devon.

The Wottons have three young children, Sienna (7), Ralphie (5) and Bernie (2). It was Bernie who got into difficulty when he stumbled into a water-filled ditch and was momentarily out of sight.

Although it was only a matter of seconds before Mrs Wotton grabbed Bernie and pulled him out, the toddler had already taken sufficient water into his lungs to stop him breathing.

Mr Wotton described the next few minutes as a nightmare. But he and his wife acted quickly and started the first aid procedure, cardiopulmonary resuscitation (CPR).

“Bernie was slumped in Kendle’s arms and had stopped breathing,” explained Mr Wotton.

“We laid him down and I began light chest compressions and mouth-to-mouth resuscitation,” he said.

Precious moments ticked by with Bernie still lifeless on the ground.

The couple were joined by a worker from a nearby livery yard and Mrs Wotton’s father Roger.

“We knew we had to get the water out of his lungs,” said Mr Wotton. “We turned Bernie over and Roger gave him a sharp tap between the shoulder blades.”

It was forceful enough to dislodge water from Bernie’s throat and airways and he let out a small cry.

With the toddler breathing again, Mr Wotton contacted the emergency services, but because of the rural location the first responder doctor took 20-30min to arrive, followed by two further paramedic crews.

“They told me that our efforts had saved Bernie’s life,” Mr Wotton said.

But it could all have ended very differently. With the length of time taken for a response vehicle to arrive on the farm, Bernie would not have survived without the first aid.

“I make sure staff attend courses at least once every two years to keep the training fresh in their minds,” he said.

“Regular and frequent training means you don’t have to try to recall what needs to be done, it’s more like a natural reaction.”

Like farmers, truck drivers work alone. The need to have up-to-date first aid is accepted and appreciated in the haulage industry.

But it is not the same in farming, Mr Wotton suggested. Health and safety is almost seen as a box-ticking, compliance task, he said.

“I think this is wrong. Lives would be saved if at least one person on every farming team underwent regular first aid training.”

He has pressed the point with Defra secretary George Eustice, urging the minister to go as far as making first aid training compulsory.

“Because there were enough of us on the farm that day who knew what to do, Bernie is still with us, with no ill effects at all. It only takes a few hours a year to attend a course,” Mr Wotton pointed out.

“But if no-one had known what to do that day, all the money in the whole world wouldn’t have been enough to bring my son back,” he said.

The Wotton’s agreed to share their story, via the Farm Safety Foundation, as a valuable contribution to Farm Safety Week.