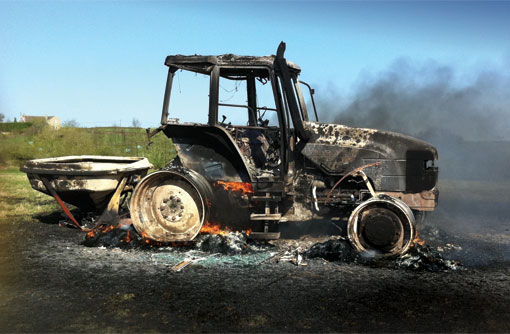 An industry that understands risks and how to avoid or manage them, where a fatality is a rare occurrence and health and safety is seen as integral to good business management. That’s the vision of the Health and Safety Executive and also those organisations that have come together to form the industry-led Farm Safety Partnership. But the statistics show we’ve got a long way to go to achieving that, writes Graeme Walker, HSE head of agriculture and food sector.

There has been a decrease in fatalities over the past few decades, but we’re now on a plateau where the fatality rate remains stubbornly high compared with that of other industries. Agriculture accounts for only around 1.4% of the workforce, but up to one in five work-related fatalities.

Thirty three agriculture workers in the UK were killed at work.
From April 2011 to March 2012, an increase of 30 deaths in the previous year.

The reasons are complex and that’s why we, and the industry, are on a long journey from increasing awareness among workers about the risks to actually getting them to change their behaviour through safer working practices.

A whole spectrum of issues must be taken into account, including structural challenges. Many farmers work alone, and continue to work long past the age of retirement in other industries. Handling livestock or mending a roof when you’re 65 is not as easy as when you were 30. Technology can speed up jobs and help with economies of scale, but the flipside is the risks posed by bigger and more powerful machines.

There are environmental issues too. Long hours, especially during the harvest when farmers have to make the most of daylight hours, can lead to fatigue and the unpredictability of the weather can be a catalyst for workers rushing to get things done. Then there are the cultural challenges. Farmers are very resourceful; they have a commendable “can do, will do” attitude, but too often this leads them to take risks and employ unsafe working practices.

On average over the past 10 years, approximately one person per week was killed
as a direct result of an agricutltural work activity, including 48 members of the public and 18 children.

Farmers have to be jacks of all trades, undertaking all manner of activities from construction to logistics and engineering in addition to the day job. This diversity is reflected in the range of causes of workplace fatalities and injuries, such as falls from height, being struck by falling objects and incidents involving workplace transport.


Our website includes a number of video case studies from those who’ve suffered life-changing injuries or, in ultimately tragic circumstances, stories told by their families. These include Robert Field who was left paralysed and had to have a leg amputated after being hit by a falling bale and Ed Pybus who was killed instantly as he stepped out of his combine on to wet ground. The auger had come into contact with overhead powerlines without him knowing.

The stories illustrate that the incidents weren’t “acts of God” but a result of failure to properly consider and manage the risks and, in some cases, simply pressure to “get the job done”. Ultimately they were all avoidable.

Agriculture accounts for one in five British workforce deaths even though farmers
form less than 1.5% of the working popultion

So what is being done? Our “Make the Promise” campaign urging farmers to come home safe at the end of the day had around 30,000 sign-ups with more than a quarter of those surveyed saying their understanding of the potential causes of serious accidents had increased.

This awareness-raising is continuing with our ongoing programme of Safety and Health Awareness Days (SHADs) focused on practical demonstrations. Nearly 8,000 free places were made available last year and almost three-quarters of farmers who attended said the events had greatly increased their understanding of the potential causes of accidents and the actions they could take to prevent deaths and injuries.

The number of deaths increases during the morning,
reduces over lunchtime and steadily rises again during the afternoon

We’re now putting together our programme of SHADs for 2012/13 and are continuing to revise and update our guidance to make it as accessible as possible. However, there is only so much HSE can do.

We’ve always said that the industry needs to take a lead. The construction industry has seen a number of significant players come together to set high standards and achieve dramatic improvement in its health and safety performance. With the creation of the Farm Safety Partnership and On-Farm Safety Charter in Wales, which include members such as the NFU and Farmers Weekly, we’re at the beginning of that process in agriculture.

Fundamentally, the key to improvement lies in creating a culture in which farmers routinely assess the risks and consider how to manage them before they begin work. Health and safety on farms doesn’t just happen it needs to be managed.