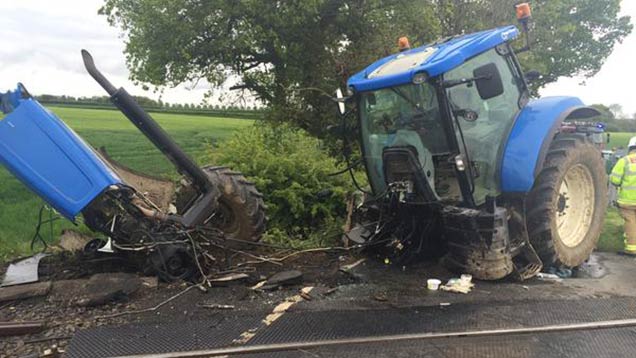 Warning lights and signalling were working correctly at the time of a crash between a train and a tractor, say rail investigators.

The tractor driver and two of the three train crew were treated in hospital for injuries after the crash on 14 May at Oakwood Farm Crossing, near Knaresborough, North Yorkshire. All were “badly shaken” by the incident.

Police said the tractor driver was lucky to escape with his life after the tractor was sliced in two following the collision, which involved the 17:29 Northern Rail passenger service from Leeds to York.

A preliminary report by the Rail Accident Investigation Board (RAIB) found the tractor was hauling an empty trailer and was stationary on the crossing when it collided with the train, travelling at 65mph.

“The impact caused the front of the tractor to become detached from the rear cab-end, with the cab remaining intact,” said the report.

“The leading end of the front Class 150 unit was damaged and stopped 468m beyond the crossing, with one of the tractor’s wheels wedged under the train in front of one of its leading wheels.”

Powered gates, which could be opened and closed remotely from buttons mounted on posts either side of the crossing, were working at the time of the accident, said investigators.

Some users have been provided with mobile operating devices, which can control the gates from within their vehicles.

However, it is understood the tractor driver did not have such as device and used one of the push buttons to open the gates shortly before the accident.

Regarding the signalling, the RAIB has concluded that the track circuits and the miniature stop lights (MSLs) were working correctly at the time of the accident.

The board will now consider the sequence of events and the factors that led up to the incident.