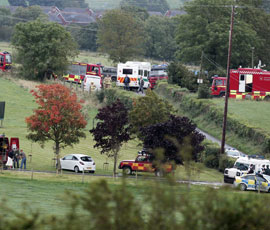 The Health and Safety Executive for Northern Ireland (HSENI) is investigating the slurry tank tragedy that killed Ulster rugby player Nevin Spence, his father and brother.

Nevin, 22, his brother Graham, 30, and his father Noel, 52, fell into the slurry tank at the family’s farm in Hillsborough, County Down, on Saturday night.

His sister Emma, an artist who survived the accident, was treated for the effects of inhaling fumes but has been released from hospital.

Initial HSENI investigations have suggested the three family members died after entering an underground slurry tank and being overcome by exposure to slurry gases.

Heartbroken family members have said the trio died trying to save each other, but the exact sequence of events remains unclear.

One possible line of enquiry being explored is that the tragedy unfolded after Noel fell into the pit trying to save his pet dog. However, a spokesman for HSENI said it was unable to comment specifically on such reports, but added it was looking at the suggestions as a “definite line of enquiry”.

“It is one line of enquiry we are looking into, which will form part of our investigation,” said the spokesman.

The HSENI said in a statement: “From HSENI’s initial investigations, it understands that the three family members who entered an underground slurry tank died from the effects of exposure to slurry gases.

“The exact sequence of events is not clear but HSENI is investigating a definite line of inquiry.”

Grieving family members released a statement, saying: “The families of Noel, Graham and Nevin Spence are trying hard to come to terms with their tragic loss.

“The three men were very close to each other in life, and that love was expressed in their final moments trying to help one another.”

“A man who was killed in his prime aged 22 with an immense future in front of him and we know that because in his 22 years he was a model professional and a model individual.”
Shane Logan, Ulster Rugby

Tributes were pouring in today (Monday 17 September) for the three family members.

Nevin, who played centre for Ulster and represented Ireland in a game against the Barbarians in May, was seen as a future full Ireland international.

“A man who was killed in his prime aged 22 with an immense future in front of him and we know that because in his 22 years he was a model professional and a model individual,” he said.

Ireland captain Brian O’Driscoll said: “Devastating news about Nevin Spence, his dad and brother. What a wonderful talent he was.”

Northern Irish golfer Rory McIlroy said on Twitter: “Just heard the tragic news of Nevin Spence and his family. Makes you cherish every day you have on this earth.”

A book of condolence is being opened at 10am today (Monday) at Ravenhill rugby ground in Belfast for the young rugby star.

Over the past 10 years, three other people have died in slurry tank accidents in Northern Ireland.

Work-related deaths on farms have inexplicably been rising in Northern Ireland, according to the HSENI. Twenty-three people have been killed in farm accidents in the province over the past 20 months.