A new campaign aims to reduce the number of fatalities and accidents involving farmers and farmworkers when using level crossings on farmland.

Launched this autumn by Network Rail with support from the NFU and Farmers Weekly, the campaign will promote the safer operation of unmanned user-worked level crossings – where the person crossing must open and close the gates or barriers by hand.

There are about 8,000 level crossings in Great Britain – and they account for almost half the catastrophic train accident risk on Britain’s railways. Some 6,500 of these crossings are managed by Network Rail – the rest are on heritage railways, metro systems and industrial railways. 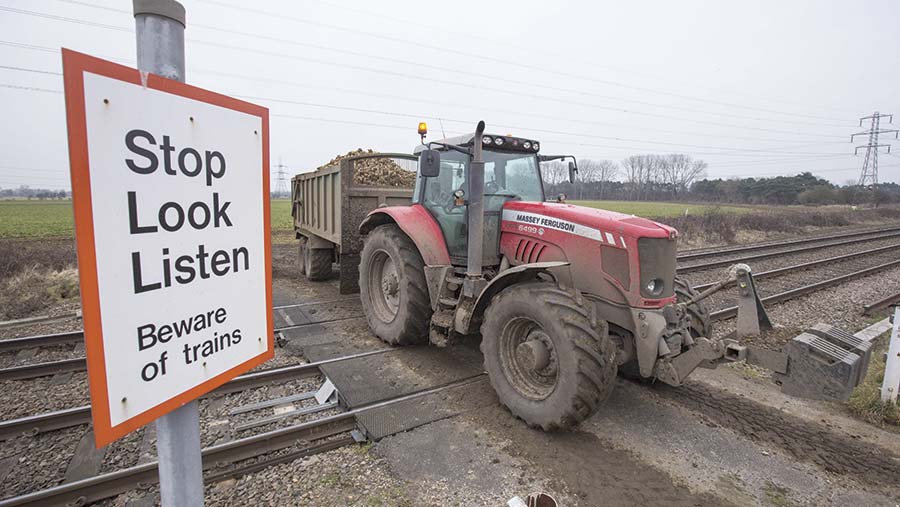 Accidents and near misses at level crossings rise during the summer and autumn months – including the busy harvest period, according to Network Rail figures. This is often when seldom-used crossings are operated – often with large and slow-moving farm machinery. 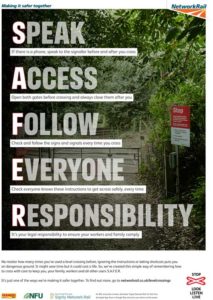 Using the acronym SAFER, the campaign aims to reminds farmers of critical safety rules – such as using telephones to call signallers before crossing the tracks – as well as highlighting the need for farmworkers and farm visitors to do the same (see How to operate a user-worked level crossing).

Network Rail head of public and passenger safety Allan Spence says: “We do see a rise in the level of incidents involving farmers at user-worked level crossings during the harvest season and we hope by working closely with the NFU we can help to keep farmers safe.

Farmers will also be provided with a number of tools and resources to encourage conversations that help people safely navigate level crossings. These include posters, leaflets and a video that can be found on the Network Rail YouTube site (see Video box).

Mr Spence says: “By following a few simple rules people can learn how to cross them safely and with confidence. We hope this will help to prevent last year’s increase in incidents at farm level crossings from becoming a trend.”

To help combat the increase in incidents at user-worked level crossings, Network Rail says it is embracing new technologies to reach the farming community and make them more aware of the dangers during the harvest season.

Safety warning lights have been installed on some crossings as an additional safety measure. On others, it has introduced power-operated gate openers and installed spoken warnings to announce when “another train is coming” after one train has passed through.

What is your experience?

Have you ever been involved in an accident or a near-miss at a level crossing? If so, we would like to hear from you – and highlight how others can learn from your experience. Call 07967 634 971 or email johann.tasker@reedbusiness.com

The rail infrastructure company has also has produced a virtual reality film which puts farmers in a scenario that clearly highlights the dangers they could face at a level crossing, while they are able to remain safe.

NFU vice-president Guy Smith said: “We appreciate farmers are often under pressure during busy periods, but would urge them to be extra vigilant, ensuring that all safety procedures are followed strictly and all workers on their farms are well informed.”

The Office of Road and Rail – the safety watchdog for Britain’s railways – says Great Britain’s level crossings are among the safest in Europe. But it warns that they still pose a significant safety risk to rail users and farmers.

Safe design, management and operation can reduce the risks posed by level crossings, says ORR safety director Ian Prosser. It can also have a positive effect on user behaviour and reduce the number of fatal and serious incidents.

Mr Prosser says: “ORR inspects the industry’s management of level crossings to check that legal safety requirements are being met. Where failings are found, immediate action is taken to ensure the crossing is made safe.”

Almost 1,000 level crossings have been permanently closed by a National Rail safety programme to reduce fatalities on the railways.

In place since 2010, the programme aims to close crossings across the rail network – improving safety by permanently eliminating crossings and the risk they pose to rail users as well as to people crossing the line.

National Rail admits that closing crossings is not always popular with farmers – especially when it forces lengthy detours. But it says closures are only undertaken after a proper risk assessment. Crossings are made safer where closure is not deemed practical.

“Level crossings were part of a network built around 180 years ago, when there were fewer and slower trains, no cars and the pace of life was much slower,” says a spokesman. “If you were to build a railway today it would not have any level crossings.”

Risk assessments consider a number of important factors, such as the crossing’s location, how much traffic it receives, and the crossing’s history of near misses and accidents. These findings are used to help determine whether the crossing should still be used.

All level crossings within the level crossing risk reduction programme have been identified as high-risk crossings. This means that there is an increased risk of an accident occurring at these crossings than at other crossings on the network.

The closure programme will continue until 31 March 2019.

How to operate a user-worked level crossing

If there are warning lights:

If a phone is provided:

Where there are no warning lights or phones:

The Office of Rail and Road says it is happy to be contacted by farmers and other users who would like more specific advice on using these crossings. For details, visit www.orr.gov.uk

A tractor driver was seriously injured by a train despite being given permission to cross the line – highlighting the dangers of using level crossings even when obeying the rules. 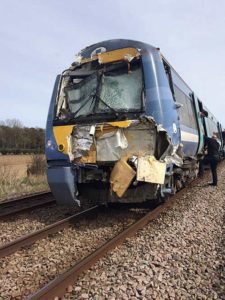 The accident happened at 12.30pm on 10 April 2016 when a passenger train travelling from Norwich to Cambridge collided with an agricultural tractor and trailer on a level crossing at Hockham Road, near Thetford, Norfolk.

The train was travelling at 87mph and could not stop before colliding with the tractor. The train did not derail, but its driving cab was damaged, and the driver and four passengers suffered minor injuries. The tractor was destroyed, and its driver was seriously injured.

A Rail Accident Investigation Board inquiry confirmed that the tractor driver had phoned for permission to cross the line. It found that the signaller had given him the go-ahead even though there was insufficient time to cross before the train would arrive.

The accident report said: “The signaller had lost his awareness of the position of the train because his levels of concentration may have lapsed, and his competence to operate the workstation safely and effectively had not been adequately monitored.”

Improvements made by Network Rail since the accident include an electronic warning system at the crossing. It also has improved the way signallers deal with requests at user-worked level crossings and installed additional screens so signallers can better track train locations.