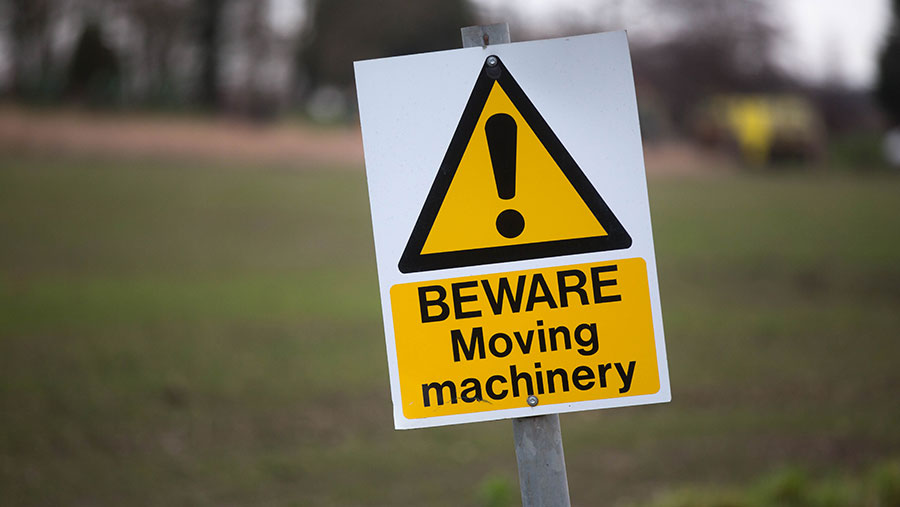 The NFU is urging all farmers to make safety a real priority in their workplace following a year-on-year increase in fatal injuries in agriculture.

New statistics from the Health and Safety Executive (HSE), published on Thursday 16 December, confirm that 34 people working in farming and related activities in Great Britain were killed in the 2020-21 financial year.

The most common causes of farm fatalities were being struck by moving vehicles (30%), killed by an animal (16%), struck by an object (13%), falling from height (13%) and trapped by something collapsing/overturning (10%).

Seven members of the public were killed on farms in 2020-21, two of whom were children, bringing the total of fatalities on farms to 41. This figure is almost double the number of people killed on GB farms in previous year (21).

The latest quarterly figures show there were a further 11 farm fatalities in Britain from April to June 2021, of whom five were employees and six were self-employed.

Between 2018 and 2021, about 12,000 workers each year suffered a non-fatal injury in agriculture or related industries.

Four ways to mitigate the biggest causes of accidents in agriculture

He said: “Unfortunately, we already know that agriculture has the poorest performance when it comes to fatal injuries, but this latest report highlights that agriculture’s non-fatal injury rate is double that of the whole industry average.

“This just highlights the need for us to work together to make a cultural change in our industry.”

Mr Roberts encouraged everyone working in farming to ensure that safety is a real priority in their workplace.

“It’s about recognising that sometimes small actions can make a substantial change in preventing tragic accidents from happening,” he said.

“By learning from each other and making these changes, we can protect ourselves and our colleagues.”

Hertfordshire farmer Mr Roberts, who is also chairman of Farm Safety Partnerships England, is due to stand down after four years as an NFU officeholder in February 2022.

When he announced that he would not be seeking any nominations in the next round of elections, Mr Roberts said he was not satisfied with the industry’s “lack of progress in addressing our poor record on health and safety”.

Meanwhile, 11,000 workers suffered from work-related ill health (new or long-standing) each year averaged over the three-year period from 2018-19 to 2020-21. Less than half of these (44%) were musculoskeletal disorders.

In October, Farmers Weekly launched Dying to Feed You – a campaign to reduce the number of accidents on UK farms and a fatality rate that makes agriculture the country’s most dangerous industry.

The Farm Safety Foundation/Yellow Wellies is encouraging farmers aged 40 and over to take part in an online survey on farm safety. The survey takes a couple of minutes to complete.

If you’re a UK farmer aged 40+, we need you!
We know what young farmers think about farm safety, but we’re really keen to hear from the more mature in our industry 😉 Take our survey here – this is your chance to let us know what YOU think! https://t.co/B9lPGT2IFQ 💛 pic.twitter.com/wnS47XNGDl