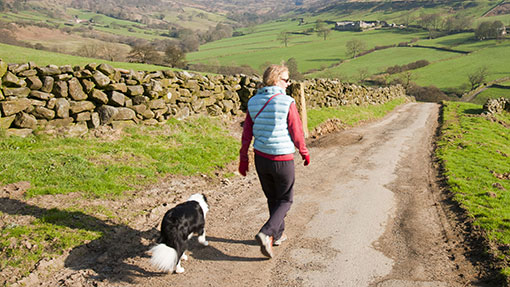 The NFU has warned dog owners and walkers to take care around livestock over the bank holiday weekend.

The union made the warning after a number of recent fatalities and injuries involving walkers being trampled by cows.

The NFU has also issued a number of dos and don’ts for walkers as part of its public-facing, Love Your Countryside campaign.

NFU livestock board chairman Charles Sercombe issued a statement to the general public which urged them to be more aware of their surroundings in rural areas. “This is a working environment so please be sympathetic especially to those animals rearing their young and give them space,” Mr Sercombe said.

“Remember that our animals are our livelihood and we can’t risk having them distressed, hurt or killed by dogs with irresponsible owners. So, back British farming by following the simple dos and don’ts.”
Charles Sercombe, NFU livestock board chairman

“When walking with dogs in fields with livestock, the advice is to keep your dog close and under effective control on a lead and not to hang on to your dog if you feel threatened – let it go as the animals will chase the dog, allowing you to stay out of harm’s way. Dogs usually run faster than livestock and this allows the dog to get to safety.

“Remember that our animals are our livelihood and we can’t risk having them distressed, hurt or killed by dogs with irresponsible owners. So, back British farming by following the simple dos and don’ts,” he added.

The warning also focused on the threat posed to cattle from neospora – a virulent parasite found in dogs’ faeces that can cause cattle to abort or give birth to calves infected for life.

Neospora can also infect sheep causing them to abort too. So the most responsible thing for dog walkers to do is to pick it up in the countryside, bag it and bin it.

Mr Sercombe said: “This is a real issue, especially for those farms which attract dozens of walkers on a daily basis walking their dogs and who don’t clean up after them. Dogs are a primary host for the parasite and while cattle infection can circulate within a herd via vertical transmission, naïve cattle [cows which have not been exposed to infection in the past] grazing on pastures contaminated by infected dog faeces can become susceptible. Just one incident of a cow eating some of the parasite eggs can have a huge impact on a whole herd.”