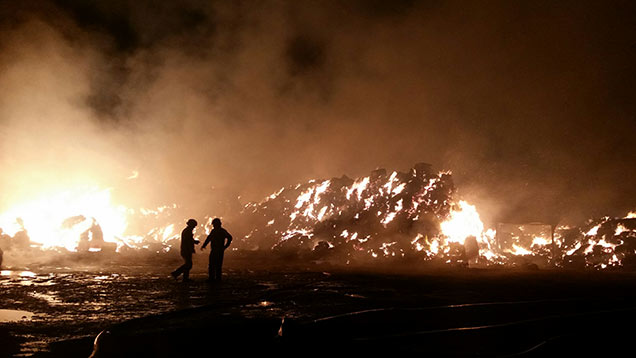 Firefighters are continuing to monitor a blaze more than four days after it broke out in hay and straw stacks on a Yorkshire farm.

At its peak 75 firefighters from stations across West Yorkshire tackled the fire which began at 12.40am Friday (21 August) at Crofton, near Wakefield.

West Yorkshire Fire Service station manager Matt Goodall said: “This fire was one of the largest incidents the service has dealt with this year and certainly the largest agricultural fire.

“The incident required 10 fire engines and a further five supporting appliances, which is in the region of 75 firefighters.”

Mr Goodall added: “The fire involved an enormous amount of hay, which is incredibly combustible, and the best way to tackle it was to allow it to burn out in a controlled manner whilst protecting the adjacent areas.”

This meant the fire service had a round-the-clock attendance at the scene until Sunday (23 August) – a total of more than 50 hours.

The fire continues to burn under control and firefighters are now making 12-hourly revisits to the site.

One of the barns was large at 100mx40m. The main A638 Doncaster Road in Crofton, also had to be shut last Friday in both directions causing delays for commuters at rush hour.