Rail bosses have been ordered to review gate opening equipment following an investigation into a collision between a tractor and a train at a level crossing.

A New Holland tractor was sliced in two when it collided with a passenger train carrying 66 people and travelling at 65mph.

The incident happened on 14 May 2015 at Oakwood farm user worked crossing near Knaresborough, north Yorkshire. 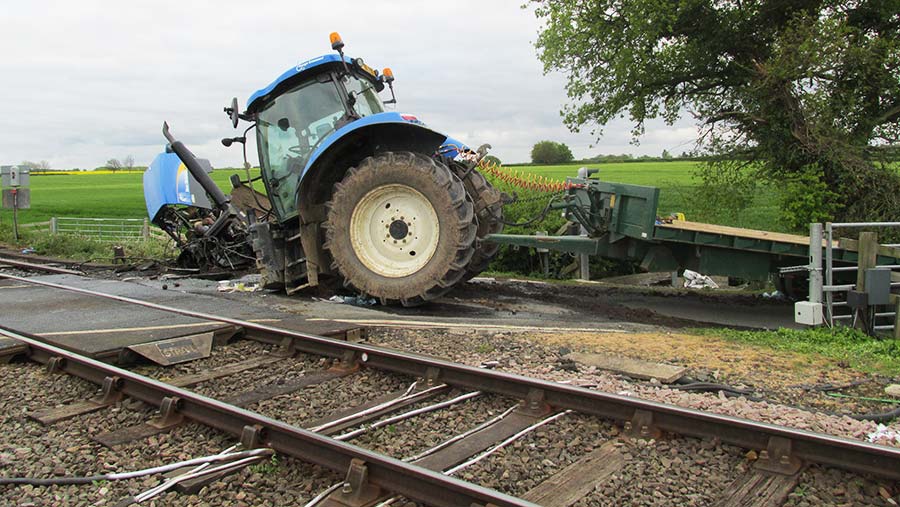 The tractor driver, an employee of Hullah Contractors who had been working at Oakwood Farm, escaped with minor injuries and the train driver was treated for shock. The train did not derail.

An investigation by the Rail Accident Investigation Branch (RAIB) concluded a “combination of factors” caused the accident, but warned the consequences “could have been much worse”.

The report (PDF) found the warning lights were working well on the day of the accident. But the underlying cause of the accident was that Network Rail did not ensure that the risks to crossing users were “adequately mitigated”.

The RAIB said: “Oakwood Farm user worked crossing is one of a small number in the country that had been fitted with remotely operated, powered gates.

“It is likely the tractor driver did not recheck the warning lights after first stopping on the approach to the crossing to press a button to open the gates.

“This button had not originally been intended to open the gates (it should only have been capable of being used to close them).

“There was no sign at the button to warn the driver to recheck the warning light before going over the crossing.”

The tractor driver said he was watching the gates opening as he drove his tractor towards the crossing. But the RAIB said he might have taken the gate opening as a “visual clue that it was safe to cross”.

The report says: “Watching the gates opening may have distracted him, causing him not to notice that the light had changed from green to red.”

At around this time, the signalling system detected the train approaching from Knaresborough, which turned the lights from green to red and activated audible alarms.

When the train driver spotted the tractor moving closer to the crossing, he gave a long blast of the horn and hit the emergency brake, but did not have enough time to stop the train from hitting with the tractor.

The train collided with the front left-hand wheel of the tractor, causing the cab to separate from the rear of the vehicle. The wheel was torn off and found still wedged under the front of the train after it had stopped nearly 500m beyond the crossing.

The RAIB said Network Rail did not implement previously recommended improvements, including instruction signs on how to use the crossing safely.

Network Rail records show that the crossing had persistently suffered from users not closing the gates after crossing.

This was a “concern” because it meant users could drive over the crossing without stopping if they did not observe the lights, said investigators.

The RAIB has recommended that Network Rail should undertake a safety review of the Oakwood Farm crossing as well as other user worked crossings fitted, or planned to be fitted, with remotely operated gate opening equipment.