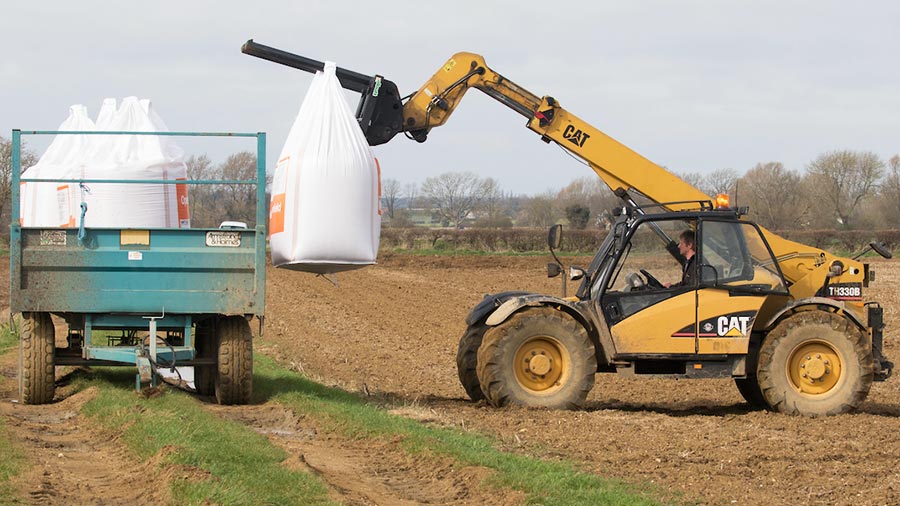 Arable farmers with seed held over from last winter are being warned to take care when handling big bags, following widespread reports of bags splitting.

Robin Aird, who manages the 1,450ha farm at the Charlton Park Estate near Malmesbury, Wiltshire, tweeted about an incident when two 1t bags collapsed as they were being lifted, spilling the contents over the barn floor.

The tweet prompted comments from nine other farmers who have had similar issues this week, posing a potential health and safety risk to anyone nearby.

###Warning### overwintered seed bags are exceptionally brittle this year. We have had two break moving and will now re-bag the lot. No warning and the hoop comes away from the bag. pic.twitter.com/KFy89mR0tk

“The autumn and winter were so wet, we never got around to drilling it, so it was stored in a barn that used to house cattle,” he said.

“We’ve had overwintered bags before and we’ve had bag failures before, but that always has been down to handler error.

“But this time, you could just hear the fibres creaking, then the whole lot went. The bags were very brittle.”

Subsequent inspections found a further four bags out of 20 with “issues”, with the seed now having to be rebagged.

“We had the seed dressed last autumn, but it never got used, so we stored it in a Dutch barn, with a tarpaulin over it to protect it,” he told Farmers Weekly.

“Yesterday, we loaded the first eight bags into a trailer and two of them ripped. This was the first time they had been lifted and the bags looked like new, but the material was very brittle.”

Mr Parr said he had no idea why it had happened, but said it was going to be a headache to transfer the seed to the drill hopper, quite apart from the health and safety risk lifting the other bags.

According to Andrew Keens of Smart Lift Bulk Packaging from Wisbech, Cambridgeshire, there are a number of reasons that bags fail. Inappropriate storage is the most likely, though manufacturing errors can occur.

“A lot of people assume these bags are infallible, but they are not,” he said. “A common cause is UV degradation during storage, though temperature and moisture can also play a part.”

All bags, which mainly come from India or China, have a UV additive included in the plastic blend, he added.

“If too much additive is used, the bags can become brittle, but if too little is used, they are more prone to degradation.”

Mr Keens advised farmers to store all bags inside and away from extremes of light, temperature and moisture, and to always cover them with a tarpaulin.

They should also be handled with care, making sure the loops are tied together and on the tine correctly.

“They tend to get a lot of abuse on farms, due to rough terrain. They get bounced around which can cause damage.

“Most bags are single-use only, so it is as well to respect that too. When a 1t bag goes, it makes a hell of a mess, but can also hurt people.”