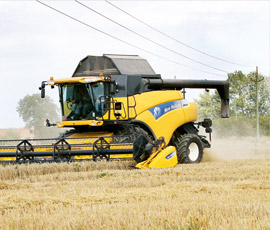 With farm machinery becoming taller and wider, overhead power lines pose an increasing threat to those who work nearby. Oliver Mark takes a look at what you should be doing to keep safe this summer

Telehandlers, combines and sprayers all stand taller, reach further and move quicker than ever before. That’s ideal for covering large acreages quickly, but also increases the risk of hitting overhead power lines.

In fact, there have been five fatalities in agriculture involving overhead power lines since 2007, as well as countless severe injuries and close escapes.

The wires strung across the British countryside can carry anything up to 400kV, but even the lowest 230v line can produce 10,000 times more current than is needed to kill a person.

One piece of farm machinery that is at particular risk is the combine harvester, which, since the turn of the millennium, has been growing in size to meet the demands for larger capacity grain tanks and increased harvesting performance.

Many models now stand perilously close to the 5.2m minimum height of the power cables that criss-cross Britain’s fields. With grain tank lids open and discharge augers out, many modern machines are more than capable of touching these cables.

Add to that the long harvest hours faced by many operators, cocooned in comfy cabs and preoccupied with staring down at a 35ft reel all day, and you see why it can become easy to forget the dangers above.

The height of cables varies according to the voltage they carry.

“The minimum height of power lines in the UK is 5.2m for 11kV and 33kV cables,” says Alastair Mitchell, an inspector with the HSE’s Agricultural Safety Team. “Farming activities carried out near power lines have sometimes led to fatal accidents but with the increasing the height of modern machinery, it now makes the risk of contacting a power line much more likely than ever before.”

“Should you touch a wire, there might not be any obvious signs initially of a problem or any evidence of electricity passing through the machine. There could be a telltale flash of light, fizzing noise or flames, but sometimes there can be no sign at all.

“The machinery doesn’t necessarily have to touch the wire, though,” Mr Mitchell points out. “Electricity can arc if a strong conductor is close enough – water and slurry, as well as metal, can all conduct electricity. Working at night or in poor visibility can also make the lines harder to spot.”

Telescopic handlers are also a major concern, as Mr Mitchell points out. “Operators should be formally trained and made aware of the risks. They should keep an eye on the boom at all times when working near power lines. Many telescopic handlers can reach beyond the 5.2m minimum height with their booms extended.”

Tipping trailers (see a case study online), rainguns and jets of slurry are also risky activities near overhead power lines. Proper planning of the work and an assessment of the risks is essential so that precautions can be taken.

With harvest approaching, Mr Mitchell offers some timely advice. “Combine operators should be particularly careful if they have CB radio aerials, or drive with the grain tank extensions open. Also take great care when operating with the discharge auger out.”

What should you do?

There are several precautions farmers, managers and landowners can take to guard against the risk of electrocution.

“The routes, height and types of different power cables, including operating voltages, should be marked out on a farm map,” says Mr Mitchell. “Copies of the maps and emergency contact numbers should be given to contractors and staff and placed in machine cabs. This is a good starting point to help assess the risks and plan the precuations.”

The local distribution network operator (DNO) can provide information and advice. You can also request the height of power lines to be measured – either underground, higher up or insulated – or arrange a temporary disconnection to allow work to be carried out safely.

The safest option is always to avoid working near power lines if you can. So it’s a good idea to plan routes for machines that avoid lines, and plan other activities such as bale stacks far enough away from danger. A minimum distance of 10m away from lines is recommended.

However, if you do have to work around power lines, the work should be properly planned to reduce risks. Using brightly coloured barrels and warning signs can act as a reminder. Plastic pipe or timber-made goalposts can also remind operators that they should be conscious of their working height. More advice can be found in revised HSE guidance, due to be published shortly.

What to do if you hit a cable

If you do hit a cable, keep calm. 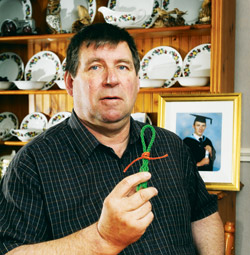 The dangers of power lines were real for farmworker Ed Pybus. Having graduated from Nottingham University in August 2007 and with a trainee manager post lined up, he took a temporary job that summer harvesting on a Wiltshire farm.

It was mid summer, the large combine he was driving had a problem with the discharge auger – it wouldn’t retract from its unloading position which rose above the minimum height of the power lines in the field he was harvesting. But with the weather closing in, Ed carried on.

“Because of the damp ground the combine started bulldozing – getting clogged up with soil under the knife,” says Ed’s father Roger Pybus (pictured), a North Yorkshire farmer. “Eventually it had to be cleared, so Ed climbed down.”

But Ed didn’t realise that the extended auger was touching the overhead power line. Climbing down, at the moment of contact with both the machine and the wet ground a massive 6,300v electric shock hit him and he was instantly killed.

The HSE prosecution showed that the company hadn’t carried out a risk assessment of working around overhead power lines and the workforce had not had adequate training. As a consequence, no one had considered the risk of working below power lines with the faulty auger extended, which contributed to the accident.

The seriousness of those oversights was reflected in the subsequent prosecution; the firm was fined £120,000 plus £45,000 costs.

Ed’s father can see the accident from both viewpoints. “We’re constantly under pressure in the farming world,” he says. “There’s always the urge to get the job done while you have the opportunity. But it’s vital to plan the job properly beforehand, and to stop and think for a moment. It could save your life.”

View a video of Ed Pybus’s story on HSE website.