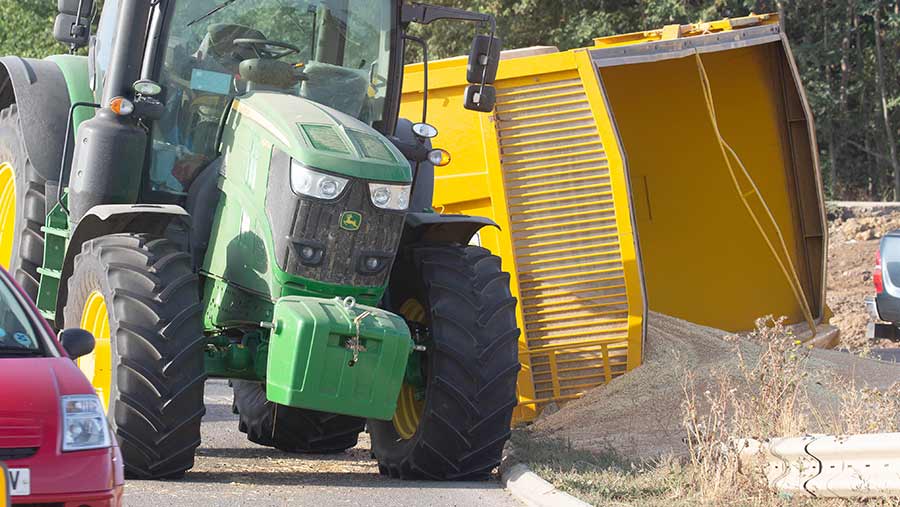 Farmer Jane Gurney, whose son Harry Christian-Allan was killed in a trailer accident in 2014 is the driving force behind a vital trailer safety campaign.

‘Tilly Your Trailer’ is an 18-point inspection procedure and certificate to ensure trailers are properly maintained and serviced.

Her son was killed during a summer job, when the trailer he was pulling caused him to crash.

The company involved was prosecuted and found guilty of having a poorly maintained trailer. It was found that the vehicle had faulty brakes.

Ms Gurney has spent the five years since her son’s fatal accident campaigning for improvements in farm safety.

The initiative involves an annual service by an authorised mechanic as well as a simple daily check each time a trailer is used on or off the farm.

It has won the support of trailer manufacturers, machinery dealers, safety experts and the police – as well as farmers.

Trailers are frequently overlooked when it comes to farm safety – often because they are used only for short periods at busy times of the year, says Phil Hannah, group service manager for the eastern region John Deere dealer P Tuckwell Ltd.

“We have known a number of fatalities in our area from trailer incidents,” he says.

Before a Tilly pass is issued the following should be checked:

Drawbars, electrics and brakes are seldom inspected on some farms, says Mr Hannah. Years of dirt and mud can build up around the brake components – but remain unseen because it is inside the wheels and wheel hubs.

“It is a good idea to take the wheels off. We have had trailers which would have passed an efficiency test on a rolling road and when we’ve taken the wheel off we have found that the shoes have come unriveted from the brake linings.”

National Trailer and Towing Association representative Sarah Smithurst is keen that police know what to look for when stopping trailers to check they are safe on the road.

“Anything that’s hitched on the back of a vehicle needs to be serviced and looked after – it is tonnage that can kill,” she says. “People have to realise that you have to live with it for the rest of your life if it does kill someone – even if it was an accident.”

What is the Tilly Pass? 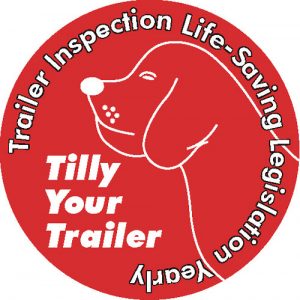 The Tilly trailer pass is an 18-point maintenance inspection for agricultural trailers weighing 10 tonnes or more.

It was launched by the family and friends of 19-year-old Harry Christian-Allan.

He died after sustaining major injuries when the tractor and trailer he was driving failed to negotiate a roundabout and struck a bridge in Cambridgeshire.

A Health and Safety Executive investigation subsequently found that the trailer was fitted with drum-type brakes that had not been correctly adjusted – rendering them ineffective. 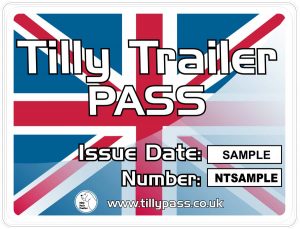 Some 70 authorised agricultural depots throughout the country are now annually inspecting trailers to the Tilly Pass standard.

The Tilly is dated and its unique number recorded along with the chassis number on an inspection sheet and central database, creating a paper trail for every trailer.

During this year, it is expected that between 3,000 and 5,000 trailers will be inspected.

Every new trailer entering the agricultural workplace through an authorised depot will receive a Tilly Pass from new – creating a log of maintenance for the trailer’s life.

The Tilly scheme is aimed at larger agricultural trailers – but smaller livestock trailers and horse boxes should also be checked before being used.

“Very few trailers come to our door for the first time in a roadworthy condition,” says Scott McKenzie at Aylesbury Trailer Servicing, who estimates that up to 80% of trailers he sees probably shouldn’t be on the road.

Faults are usually repairable. They include worn brakes, excessive play in the coupling heads where the trailer attaches to the vehicle, broken rear lights and worn or bulging tyres.

“Trailers inherently bounce through potholes,” Mr McKenzie says. “They are usually wider than the vehicle towing them so they are dragged up kerbs and they are susceptible to lots of damage. But they are not checked in the same way as a car.

“But a trailer has to be roadworthy – even though there is no legal requirement for an MOT. If you are not trained or qualified to check things such as your brakes or breakaway cable or lights, then find somebody who is and get it done.”

Modern trailers are much more than metal boxes on wheels – and should be properly maintained, says Suffolk-based manufacturer Angus Western, of Richard Western Trailers.

Agriculture should be brought more in line with the road haulage sector to ensure vehicles are safe both in the field and on the highway, he believes – not only for farmers and other operators but for the sake of other road users too.

“No one wants to have a product that has been involved with a fatality,” Mr Western says. “For us, it is never a box on wheels. Of course, we are passionate about trailers but we just want people and our products to be safe.”

Modern trailers have much improved braking compared with older trailers, he says. A scrappage scheme for older trailers would take older second-hand equipment off the market in an affordable way, instead of passing it from farm to farm.

“We need to have a line where we all meet the same standards,” says Mr Western. “Never skimp on parts. You cannot put small pipes on brakes. They have got to be the best pipes and the best quality because you are dealing with people’s lives.”

Unroadworthy trailers continue to be driven on the public highway by irresponsible farmers willing to flout the law, police have warned.

“They’re in poor condition, the lights are hanging off and you can see quite clearly that they aren’t braked because there is nothing attached to the tractor towing it,” says Martin Arrowsmith, a police officer with Cambridgeshire constabulary’s rural crime action team.

Having worked on farms before joining the police, Mr Arrowsmith has a particular interest in road safety and agricultural vehicles.

Trailers are being overloaded by farmers rushing to transport crops from field to store as quickly as possible, he warns.

“It’s not so much the bigger farms we have a problem with; it is the smaller farms who haven’t got the money to lay out on trailers,” Mr Arrowsmith says.

As well as breaking the law, farmers should remember that lives are at risk when an unroadworthy vehicle crashes on the road, he adds. “It could be the innocent party driving the other way who is injured or killed as a consequence.”