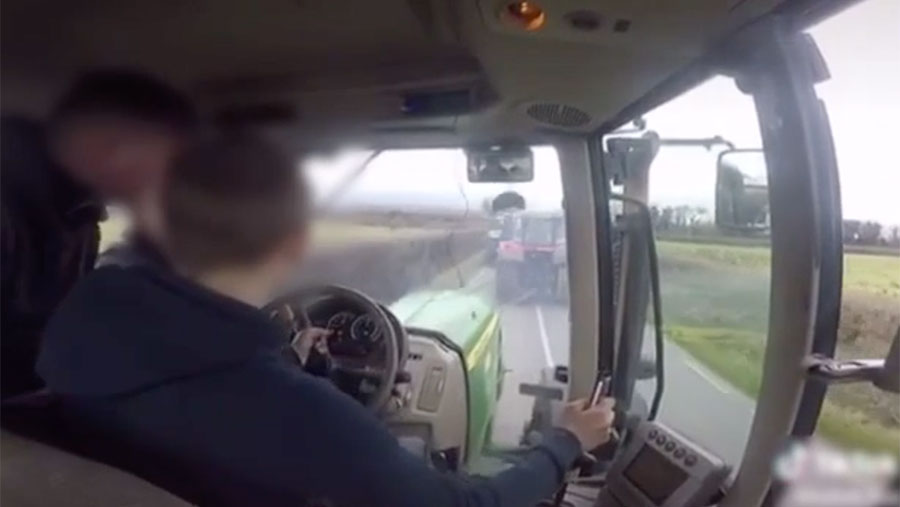 A screenshot from one of the videos © TikTok

An investigation is under way after a number of videos appeared on TikTok showing farm machinery being misused for dangerous stunts on farms in Ireland.

One shows young men driving three tractors at considerable speed, trying to overtake each other on a narrow rural road in what appears to be a race. Another is recorded on a mobile phone by a person standing on the hitch of a moving tractor-trailer.

Other clips show a quad bike being driven up a steep incline before it rolls back down, almost overturning, and people climbing on heavy farm machinery, including two people sitting in the bucket of a digger as it rotates quickly.

Tim Cullinan, president of the Irish Farmers’ Association (IFA), hit out at the people behind the pranks, branding them “grossly irresponsible” and an “accident waiting to happen”

“I am disgusted that people could be so casual and have no regard for the dangers involved in what they are doing,” Mr Cullinan said.

With eight farm fatalities already in Ireland this year, Mr Cullinan said those carrying on like this should take a hard look at themselves.

“Too often, people are not willing to act responsibly and identify the risks,” he added. “All farmers and contractors need to make it clear to their employees that engaging in these practices is a sackable offence.”

A spokesman for TikTok, the Chinese-owned video sharing app, said it did not allow content “that encourages or replicates dangerous challenges that might lead to injury”.

He added: “Our safety team is investigating, and we will take appropriate action in line with our community guidelines.”

The Health and Safety Authority in Ireland described the antics featured as “shocking”.

It added: “Farmers and contractors must take a zero-tolerance approach to this type of behaviour. We will take robust action where we can identify the individuals concerned.”